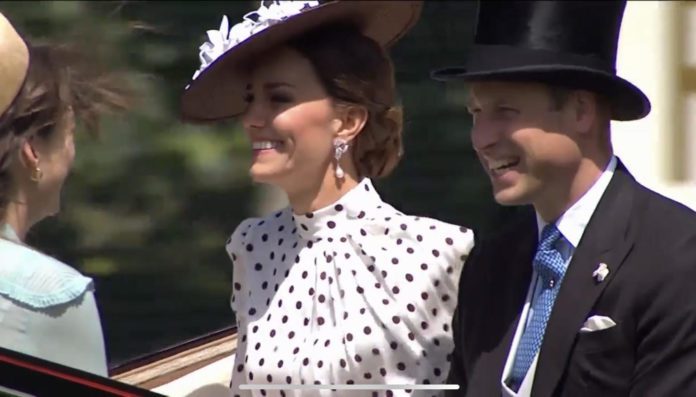 Kate Middleton stunned in an outfit inspired by Princess Diana at Royal Ascot with Prince William on Friday.

The Duke and Duchess of Cambridge led the royal family in a carriage procession at the iconic horse race this afternoon.

Kate wowed the crowd in a polka dot dress by Alessandra Rich, which retails at £1,970.

The Royal Procession has arrived on Day 4 of #RoyalAscot pic.twitter.com/NUicYAglt0

The Duchess teamed the dress with a bespoke Sally Ann Provan wide-brim, dark-coloured hat which featured white flowers around the rim, which retails at £750.

The 40-year-old also donned a stunning pair of pearl-drop earrings, which belonged to William’s late mother Diana, The Princess of Wales.

Kate’s look was also incredibly similar to one worn by her late mother-in-law at Royal Ascot in 1988.

On Friday, the couple were joined in their carriage by William Vestey, the current Lord Vestey and his wife, Violet.

In the carriage that followed sat Prince William’s cousin Peter Phillips and his new girlfriend Lindsay Wallace, who made her royal debut at another famous horserace, the Derby, over Queen Elizabeth II’s Platinum Jubilee weekend.

William and Kate’s appearance at Royal Ascot comes after the Queen pulled out of attending the annual event, with many speculating that this was due to the sweltering weather, as temperatures were predicted to reach 31°C.

However, the 96-year-old monarch may still make an appearance at the iconic event on Saturday.