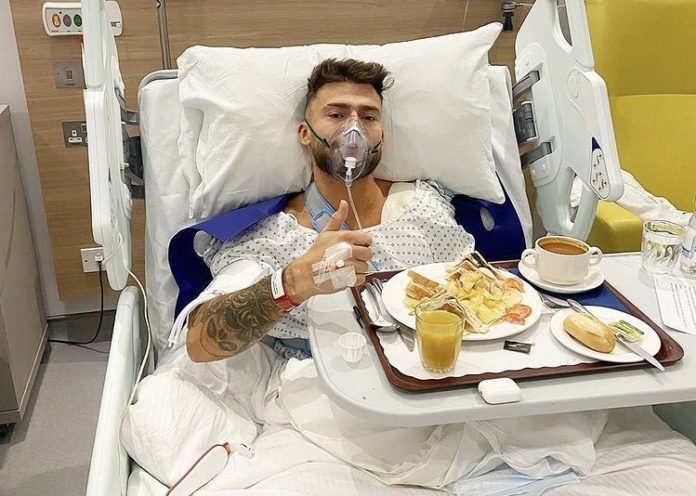 Jake Quickenden was rushed to hospital after obtaining a horror injury while filming Celebrity SAS: Who Dares Wins.

The former X Factor star was forced out of the competition after rupturing his pec muscle and his bicep – tearing the tendons straight off the bone.

Sharing a photo from his hospital bed to Instagram, after Sunday night’s episode aired, Jake wrote: “Didn’t end how I wanted…”

“Believe it or not I was loving every second, I found out exactly what I needed to know about myself!! I will always give 100% and I said the only way I would leave the show is in an ambulance and unfortunately that’s what happened…”

“I’m back to normal now after a year of pain and physio!!” he revealed.

“The show was the best/ hardest thing I’ve ever done it tested me to my limits, but it also told me that I am who I thought I was, I’ll never give up, I’ll help my mates, I will lift the mood and will always remain positive, even getting driven away in the ambulance I was positive about the outcome and I knew I would come back bigger and better.”

“I would like to thanks the staff @antmiddleton @melvyndownes @stazthrudark @jason_carl_fox @billingham22b and also the rest of the cast who honestly worked so hard and only us guys will know how hard it truly was, nobody has anything to be ashamed of.”

“I’d love some of the keyboard athletes to give it ago, they wouldn’t last a fucking minute!! Peace and thanks as always for the love and support. ❤️,” Jake added.