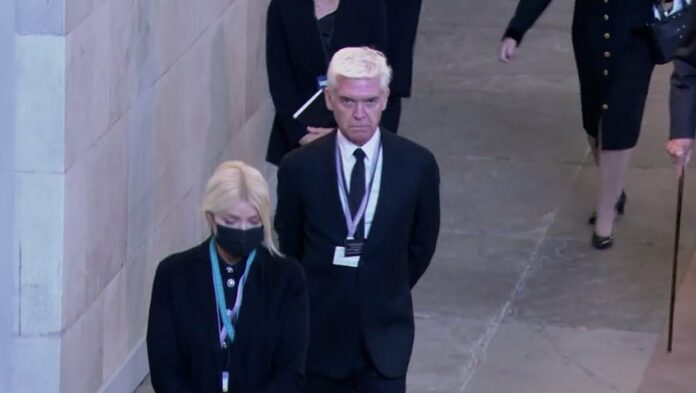 Holly Willoughby and Phillip Schofield have come under fire for “skipping the queue” to see Queen Elizabeth II’s coffin.

The This Morning presenters queued in a separate line to the thousands of mourners who waited hours to view the late British monarch lying in state in Westminster Hall on Friday.

The pair have faced major backlash from social media users for not waiting in the main queue like other celebrities, such as David Beckham and Susanna Reid.

One person tweeted: “David Beckham joined the queue with members of the public for 12 hours. I have far more respect for him for doing that than I do for those who used the fast-track VIP line, like Holly Willoughby and Phillip Schofield. Queue jumping is the worst British insult.”

Another wrote: “Respect to David Beckham and Susanna Reid for queuing for hours like everyone else but Holly Willoughby and Phillip Schofield can go f**k themselves for jumping the queue. Celebrities are not important and should never be put before anyone.”

A third penned: “Sorry Holly but I have lost all respect for you and Phillip Schofield. When I see people in the 80s queueing 12-14 hours and you think it’s acceptable and right to jump the queue. Appalling. Are you going to apologise?”

Susanna Reid and David Beckham queued to pay their respects to the queen, holly and Phillip didn’t.

This queue is exposing the mindsets of celebrities, those who are down to earth and humble, and those who aren’t

Some choose to show humility, like the hundreds of thousands joining @susannareid100 and David Beckham queuing to pay respects to The Queen.
Others, like Phillip Schofield and Holly Willoughby, choose to show entitlement.
One choice speaks louder than others.

David Beckham joined the queue with members of the public for 12 hours. I have far more respect for him for doing that than I do for those who used the fast-track VIP line, like Holly Willoughby and Phillip Schofield.

Taking to Instagram on Saturday evening, ITV rushed to the defense of Holly and Phillip, insisting that they had in fact been at the event in a “professional capacity”, for which they were granted VIP access to report upon.

They wrote in a statement: “Hello everyone, we would like to clarify something. We asked Phillip and Holly to be part of a film for this Tuesday’s programme.”

“They did not jump the queue, have VIP access or file past the Queen lying in state – but instead were there in a professional capacity as part of the world’s media to report on the event.”

This Morning have issued this statement in regards to Phillip Schofield and Holly Willoughby. pic.twitter.com/Fo3Eqcjx3a