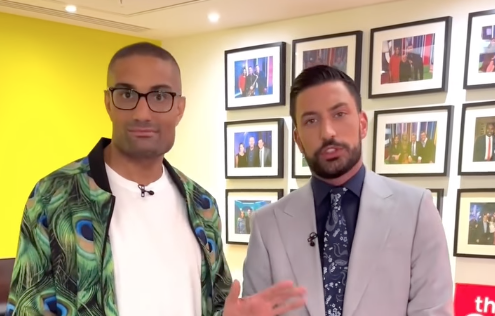 The popular BBC contest kicked off last week, which saw 15 celebrities grace the dance floor with their professional dancer partners.

The same-sex partnership danced the Cha-Cha to I’m Your Man by Wham! on Saturday night.

Rumours have been rife that Giovanni and Richie “haven’t clicked” and that tensions are rising off-camera.

Appearing on Strictly Come Dancing’s spin-off show It Takes Two on Wednesday, the Italian pro dancer slammed rumours of a feud between them.

Speaking directly to the camera, Giovanni insisted he had “no problem” with his celebrity partner Richie.

“We are having a good – we’re definitely having a good time. Obviously, it’s a dance competition at the end of the day, so we have to learn something.”

Giovanni and Richie will take to the dancefloor once again on Saturday night, dancing the Quickstep to Dancin’ Fool by Barry Manilow.

A post shared by BBC The One Show (@bbctheoneshow)

Meanwhile, Molly Rainford and Carlos Gu will also dance the Quickstep to Love On Top by Beyoncé.

Two couples will bring the Viennese Waltz to the dance floor; Kym Marsh and Graziano Di Prime will dance to Runaway by The Corrs, and Fleur East and Vito Coppola will dance to Glimpse of Us by Joji.

Ellie Taylor and Johannes Radebe will dance the Paso Doble to Les Toreadors by Georges Bizet.

Matt Goss and Nadiya Bychkova will take the Samba to the dance floor on Saturday night, with Night Fever by Bee Gees.

Fan-favourites Will Mellor and Nancy Xu will dance the Salsa to Never Too Much by Luther Vandross.

Two couples will dance the Jive on Saturday night; Hamza Yassin and Jowita Przystal will dance to Blinding Lights by The Weeknd, while Tyler West and Dianne Buswell will dance to Hit The Road Jack by Buster Poindexter.

Helen Skelton and Gorka Marquez will dance the Cha-Cha to Rain On Me by Lady Gaga and Ariana Grande.

The final two couples will take the Tango to the dance floor Jayde Adams and Karen Hauer will dance to Rumour Has It by Adele, while James Bye and Amy Dowden will dance to Bad Habits by Ed Sheeran.