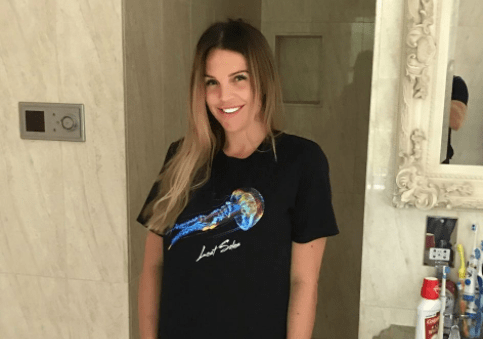 Danielle Lloyd has weighed in on the Wagatha Christie scandal, after Coleen Rooney explosively alleged that fellow WAG Rebekah Vardy was selling stories about her to tabloid media.

Danielle revealed that she is not a fan of Rebekah, and the pair have had their own falling out in the past.

The former Miss England and Miss Great Britain explained that she felt Rebekah had a “vendetta” against her, and labelled the heavily pregnant WAG as “pathetic.”

Danielle told New Magazine: “I think she’s pathetic. Honestly I haven’t got time for her.”

“I’ve had my own run-ins with Becky and she hasn’t been very nice about me.”

“I’m not going to disclose why we fell out, but Becky knows what she did.

“It was like she had a vendetta against me.”

Speaking on This Morning last week, Danielle hinted that she had similar issues with the WAG: “I wasn’t shocked, I’ve had run-ins with Becky before over similar things,” she said.

“I wasn’t shocked when I saw who it allegedly was.”

“I think she did it, I think it’s a shame because she never thought it’d get out, but it has.”

Coleen sensationally accused Rebekah of selling stories about her in an explosive statement last week.

Taking to Twitter, the wife of English footballer Wayne Rooney said: “For a few years now someone who I trusted to follow me on my personal Instagram account has been consistently informing The SUN newspaper of my private posts and stories.”

“Over the past five months I have posted a series of false stories to see if they made their way into the Sun newspaper. And you know what, they did!”

“It’s been tough keeping it to myself and not making any comment at all, especially when the stories have been leaked, however I had to. Now I know for certain which account/individual it’s come from.”

“I have saved and screenshotted all the original stories which clearly show just one person has viewed them. It’s……… Rebekah Vardy’s accout.”
Listen to this week’s Gosscast; where Goss.ie Founder Ali Ryan and Editor Kendra Becker are, of course, breaking down all the details of the Coleen Rooney v Rebekah Vardy drama.