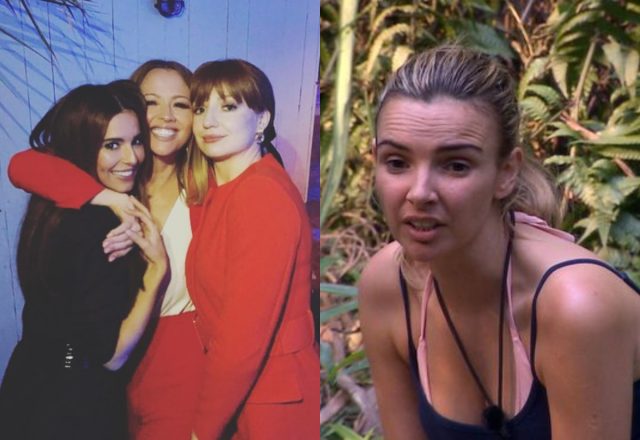 Cheryl, Kimberley Walsh and Nicola Roberts have slammed claims that they’ve been slating their former bandmate Nadine Coyle in a group chat.

The Sun reported that the trio had been swapping messages about Nadine, and had been voting for her to do all the Bushtucker Trials.

But in a rare move, the Girls Aloud stars have responded to the reports in furious statements.

Speaking to MailOnline, Cheryl said: “We only want to see Nadine do well, and regardless of any differences we might have had, we will always all have love for each other.”

“We did not enjoy watching her distressed when jumping out of the plane. And we don’t have time for group chats regarding the trials on the show!”

Kimberley said: “I felt really emotional watching Nadine jump out of the plane and texted Cheryl saying how hard it was to watch. I think she’s doing great in there.”

Agreeing with her pals, Nicola said: “We don’t have a group chat about I’m A Celebrity, this just isn’t true. We only wish Nadine the best in the jungle and hope she does well on the show.”

A spokesperson also told the publication: “This story is completely fabricated and made up.”

“Cheryl, Nicola and Kimberley have not been ‘plotting’ to get Nadine to do trials in I’m A Celebrity. To suggest they have been is quite frankly ridiculous.”

The news comes after Nadine denied reports that she didn’t get on with Cheryl during a recent episode of I’m A Celebrity.