Charlotte Crosby has accused her ex Joshua Ritchie of using her to gain “opportunities”, after he signed up for Celebs Go Dating.

The former Geordie Shore star, who is currently in Dubai, split from Josh last month after two years of dating – and just weeks later he signed up to appear on the E4 dating show.

Taking to her Instagram Story after finding out about Josh’s new TV project, Charlotte raged: “So, a bit of a revelation today. I’m shocked, shocked to say the least.”

“When you’re sitting in Dubai and find out that your ex-boyfriend, who you didn’t think was like this at all, is going on Celebs Go Dating.”

Charlotte then explained: “Not gonna f**king lie, right, at one point we were on the verge of getting back [together] and I said I’ve been asked to do Celebs Go Dating but obviously I’d said no, I would never do that, like, we’ve only just finished…”

“We were in a two year relationship and lived together and it’s just wrong, and his words to me were, ‘Do you think I’d ever do that?'”

“And to find out he is on Celebs Go Dating, wow, wow, that’s all I’ve got to say, f**king wow,” she continued.

“I think this is what I must just do, people must just get with us so that then they’re offered opportunities afterwards.”

Addressing Josh while looking into the camera, Charlotte said: “I tell you what, don’t f**king mention my name once when you’re onn that show, don’t f**king even speak about me, you f**king little toe rag.”

After one of Josh’s friends claimed there was two sides to every story, Charlotte took to her Instagram Story again to say: “I just need to get this off my chest. This whole two sides to a story… I mean come on, leave it off will ya?”

“If we want to go into this whole two sides of a f***in’ story, I’ve got messages, I’ve got everything, I’ve got girls messaging us.”

“I’ve got so much evidence that I stuck by that boy through all of this s**t.” 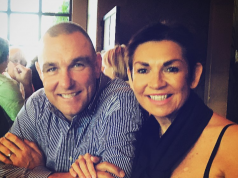