Brooklyn Beckham has reportedly been given his own section of the Beckham mansion so that he can have more privacy with his girlfriend, Hana Cross.

While the 19-year-old lives with his parents and three siblings in their London mansion, he is set to move to a more private section of the house that was previously occupied by staff.

“David and Victoria love having Brooklyn at home when he’s in London. But he’s nearly 20 and they have decided that he needs some independence in some way,” a source told The Sun.

“It’s a great way for Brooklyn to make steps towards moving out, but not for good just yet. And it means he can spend as much time with Hana as he likes,” they added.

The couple were spotted holding hands in December and appeared on each other’s social media accounts several times, after it was reported that they had been secretly dating for months.

It seems like Hana is getting on well with the entire Beckham family, as she attended Victoria’s Autumn/Winter London Fashion Week show along with her beau and his siblings and father. 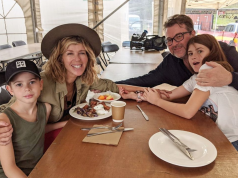