X Factor star Katie Waissel has announced that she is expecting her first child with boyfriend Andy Speer.

Just days after Cher Lloyd, who also starred in the 2010 series of The X Factor, announced her pregnancy – Katie has followed suit with her own baby news.

The singer, who lives in New York with her boyfriend, revealed the happy news on Instagram.

Katie shared a sweet photo of her bump while lying on the couch, and in the background is a blackboard that reads, “Baby Speer coming summer 2018”.

She also wrote, “So today is officially the day that I get to share the greatest blessings on earth with you! For those who have been such a huge part of my journey over the years, you will know that life certainly hasn’t always thrown me roses, however it has honestly been perfectly imperfect.

“The amazing thing is, life threw me all the tools I could possibly need to build and craft such an incredible future and now I can say this rose bush has blossomed into such beautiful flowers.

“You have watched me at my most vulnerable, and my most fearless, through some incredibly tough times and followed me right by my side through to the shining light at the end of some of the darkest tunnels.”

“And now, you get to witness the greatest blessing life could bestow upon another human being. The gift of life!

“Andy and I are thrilled to announce that we are expecting! Overwhelmed and overjoyed, we couldn’t be more excited that we have created such an incredible human being and he isn’t even here yet!

“We would love for you to follow our journey at thefitbumpnyc.com We thank you for all of your kind words, love and blessings and are excited to share this incredible journey with you! All our love, Katie & Andy.”

The musician has remained out of the spotlight since appeared on The X Factor in 2010, but did appear Celebrity Big Brother back in 2016. 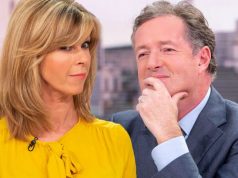