Anna Vakili has slammed fitness influencer Hana Basrawi, after she criticised her for getting in a fight with “teenagers” in Hyde Park.

The Saudi Arabian influencer, who lives in London, revealed she would never support the Love Island star ever again – after she saw videos of the fight on social media.

Taking to Instagram, she wrote: “I won’t be watching, supporting, buying or even working with any brands that work or are involved in any way shape or form with @mandivakili and or @annavakili.”

Hana then tagged brands that already work with Anna and her sister Mandi, who was also involved in the fight.

Anna then shared a screenshot of the message on Instagram, and hit back at the fitness guru’s comments.

“@itsalwayshana You think I care about brands and money???” she wrote.

“All I care about is the truth and my family. They can’t verbally abuse me when I’m having a peaceful picnic and then attack my little cousin. I won’t allow that.”

“You should be ashamed of yourself. People like you allow people like them to get away with this,” she added.

Anna’s fight with a gang of teenagers hit headlines on Tuesday, but the pharmacist has insisted that she was acting in self-defence.

In videos circulating on social media, the 29-year-old can be seen dragging a girl by her hair, before her sister Mandi kicks her in the head.

Physically abusing a 16 year old and ripping off her clothes revealing her awrah, not just one but you and your sisters & friends do you have no shame?! Fame really gets to people’s head, they blocked everyone that tries to @ her how sickening @annavakili pic.twitter.com/GW1JJLssVQ

In a statement posted on Instagram, Anna said: “Yesterday I was having a picnic in the park with my sister, boyfriend and cousin when we were subjected to continuous verbal abuse from a group who came near us who were doing drugs.”

“Wanting to remove ourselves away from them we packed up to leave they came over swung at my cousin and threw her by her hair leaving her bleeding. Out of self-defence, we had to get them off of her and leave.”

“There was a large group of them and not many of us. These are not ‘innocent children’ the guys with them kept shouting they have a gun, and they tried to steal my sister’s phone.”

Anna then confirmed that the violent attack has been reported to the police.

“If you watch the long video that’s from far slowly. You will see they started attacking my cousin and swinging her on the floor by her hair. All these DMs and messages from people that weren’t even there,” she continued.

“Why would we randomly attack anyone ???? Use your brains. We were attacked verbally and physically first because they knew me. Everything we done was to protect ourselves and my cousin. Can’t even enjoy a picnic in peace. I’ve just had enough.”

In another post on her Instagram Story, Anna shared a photo of herself crying, and wrote: “I can’t get out of bed, I’m exhausted and sick of the abuse since coming off TV. And now accusations from a small clip which isn’t the full story.”

“Witnesses saw they attacked us for no reason. Anyone else trying to enjoy themselves on a picnic and their little cousin gets attacked bleeding for NO REASON what would they do?” 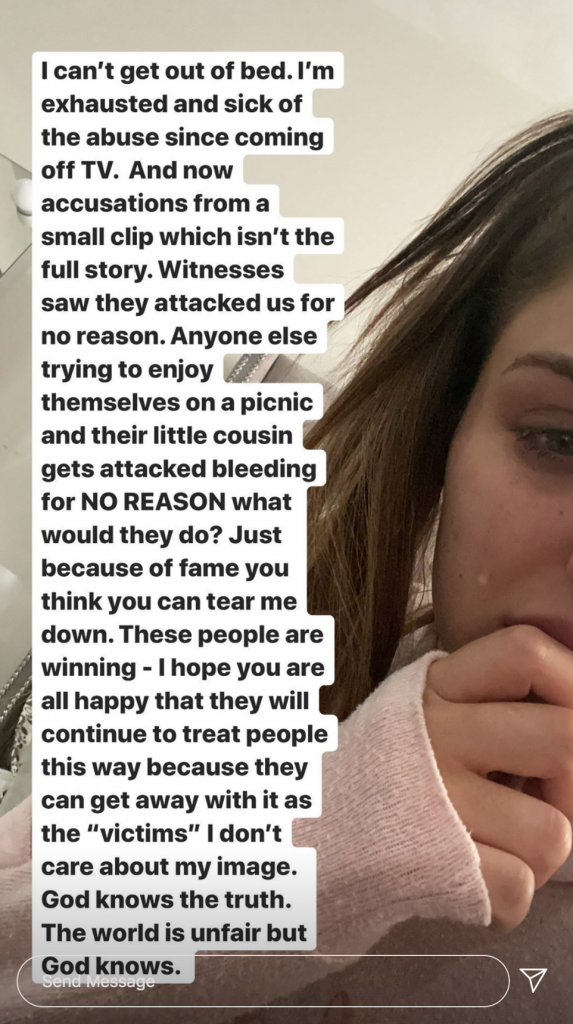 “Just because of fame you think you can tear me down. These people are winning – I hope you are all happy that they will continue to treat people this way because they can get away with it as the ‘victims’.”

“I don’t care about my image. God knows the truth. The world is unfair but God knows,” she added.