The funniest memes from Love Island 2022 so far 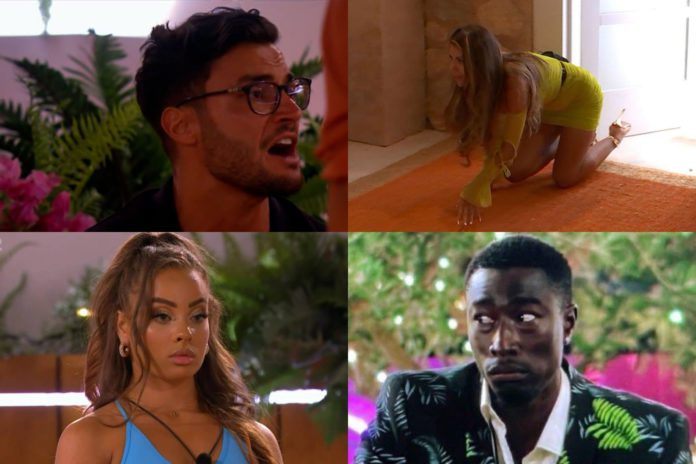 Season 8 of Love Island kicked off last month, and it has already given us weeks of entertainment and drama.

One of our favourite things about the hit dating show is the hilarious Twitter commentary and the memes that come with it.

We have rounded up our favourite memes from the series so far.

Danica Taylor entered the Love Island villa as a bombshell, and she has been unlucky in love so far.

Fans think the dancer is failing to find a connection because one of her hilarious mannerisms: speaking with too much professionalism, instead of flirting.

One viewer tweeted: “Danica’s the one who organises the girls group holiday and collects everyone’s passports she just has that project management vibe in every corner of her life.”

Others compared her conversations to job interviews. Take a look:

Danica to Adam "thank you for the opportunity" #loveisland pic.twitter.com/8V2Jo6qM5z

Why is all of danica’s conversations like a job interview ☠️ #LoveIsland pic.twitter.com/LHX1ak46yZ

They should’ve sent Danica to Brussels to lead brexit negotiations, with how she brokers discussions she would’ve secured that oven ready deal within 24 hours #LoveIsland

“That is my line Tasha”
“You are a liar, actress, go the fuck out”
“The fakest person I ever met. You deserve an Oscar”
“Faker than Louis Vuitton from China”

Davide has produced some of the most iconic lines in #LoveIsland  history pic.twitter.com/VyW6q5qLf7

Davide Sanclimenti will definitely go down in Love Island history as one of the most iconic contestants so far, thanks to his hilarious one-liners.

One of his most memorable to date came after he found out Ekin-Su Cülcüloğlu snuck off to the terrace to kiss bombshell Jay Younger.

The Italian Stallion shouted at her: “You are a liar, actress, go the f**k out!”

Fans can’t get enough of the line, and have been tweeting it almost every night since.

Me 🤝 saying “YOU ARE A LIAR, ACTRESS” every 10 seconds

If primark makes T-shirts saying “you are a liar! actress!” #loveisland pic.twitter.com/X6TkXv7QSu

this ep is long, i thought we were getting a dumping, ITV YOU ARE A LIAR AND AN ACTRESS. GO THE FUXK OUT #loveisland pic.twitter.com/0z6ds0wovO

ITV YOU SAID MOVIE NOGHT WOULD BE TONIGHT YOU ARE A LIAR AND ACTRESS #loveisland pic.twitter.com/tHHZjtIaDF

LMAO I just heard someone in the street shout at someone "YOU ARE A LIAR, ACTRESS, GO THE FUCK OUT"

Ekin-Su and Davide have been hilariously dubbed the mom and dad of the season by fans.

The Turkish actress and Italian heartthrob have had their fair share of ups and downs over the past few weeks and each time they previously split, fans share their heartache over the couple’s “divorce”.

Check out some of the memes below:

not a SECOND divorce for Davide and Ekin-Su #LoveIsland #LoveIslandUK pic.twitter.com/fHvOO2a1Pa

Davide and Ekin-Su going through their 3rd divorce 😭 #LoveIsland pic.twitter.com/9puwXQqkKW

Me watching Ekin-Su and Davide on their 4th divorce #LoveIsland pic.twitter.com/dlS9IFffs3

why is charlie doing the worm?? #LoveIsland pic.twitter.com/ISuC0ZnBbI

The heart rate challenge made its’ highly anticipated return to our screens earlier this season, and it did NOT disappoint.

Fans were loving the drama, but one stand out moment from the challenge was when bombshell Charlie started doing the worm in the hopes of raising the girls’ heart rates.

Check out some of the hilarious reactions below:

Charlie’s about to do the worm all the way back to Gatwick #loveisland pic.twitter.com/eGtq2WOpzu

I will never forget the mental image of Charlie doing the worm half way across the garden, slowly getting further n further away from the girls 😭😭 HAHAH #LoveIsland pic.twitter.com/tIO3MPLWP4

Legend has it that Charlie’s still doing the worm on the grass #LoveIsland pic.twitter.com/E62ritDauX

Tell Charlie to do the worm😭 #LoveIsland pic.twitter.com/Mp2KL7ngwR

5. Andrew being accused of being a thief

Get Carol on the show! NOW!
First challenge✅
Did you steal my daughters handbag? https://t.co/IBZaH3fE5a

She tweeted the official account for the ITV dating show: “He looks like the man who stole my daughter’s handbag in Sainsbury’s.”

Carol then demanded: “Can you confirm if he was in Bristol Sainsbury’s on March 12th love island.”

It was later confirmed that Andrew was in Dubai at the time, clearing him of the “crime”, but that hasn’t stopped fans from hilariously dubbing him “the bag thief from Sainsbury’s.”

andrew saying he works in real estate but we all know his true job title is the bristol sainsbos thief, budget chris hughes cannot fool us! #LoveIsland

Andrew the thief from Sainsburys #loveisland

6. Michael Owen reacting to his daughter Gemma on the show

Gemma Owen is the daughter of football legend Michael Owen, who hilariously reacted to her doing the heart rate challenge with an emoji of someone covering their eyes.

Gemma’s famous father has been a popular meme this season, with fans guessing what his reactions would be for different situations in the drama.

After the latest drama on the show, which saw Luca Bish kick off at Gemma after Movie Night, viewers are hoping Michael is watching and does not approve of his daughter’s beau.

Michael Owen calling the producers to make them kick Luca out #LoveIsland pic.twitter.com/9i6UcYVmOU

Luca you fucked building any kind of relationship with Michael Owen #loveisland pic.twitter.com/BhQ1mFqAsW

I hope Michael Owen is watching how Luca is behaving x #LoveIsland pic.twitter.com/UsQbhxI71S

Deji’s face expression have me on the floor #loveisland pic.twitter.com/MjGu66nIQk

Casa Amor bombshell Deji stole the show during Movie Night thanks to his hilarious facial expressions, as he reacted to the chaos around him.

Viewers took to Twitter in hysterics sharing photos of the 25-year-old’s face as his fellow Islanders fought, while he sat there eating popcorn.

this is just gogglebox for deji #loveisland pic.twitter.com/07131dTDFz

DEJI’S FACE IS ALL OF US WATCHING THIS #loveisland pic.twitter.com/Mz5JSOLxZf

8. Ekin-Su crawling on the terrace

We are still not over this iconic moment.

When bombshell Jay entered the villa, he turned Ekin-Su’s head from Davide, and she snuck up to the terrace for a secret rendezvous with him.

She and Jay got on their hands and knees and crawled towards to couch to avoid detection from the other Islanders, before sharing their first kiss.

Check out some reactions below:

All the boys dragged Ekin-su for crawling yet look at them all crawling back to their girls now! #LoveIsland pic.twitter.com/xv6olRk6fB

Ekin-Su’s character development, from crawling across the terrace to kiss Jay to being the first to say she’s closed off 😭❤️ #loveisland pic.twitter.com/JjGS5n6hyb

Ekin-Su and Jay are giving us the iconic content we deserve. The crawling to meet and kiss in secret to Jay stirring the pot like a cast member of Real Housewives. I appreciate their effort and commitment to GIVING. #TALKSWITHASH

I am still stanning for Ekin-Su.

She had a grown man crawling on the floor, and told a man to make her food after she was with her side dish. She’s ICONIC. #LoveIsland pic.twitter.com/FGAwTpg9k9

the fact ekin-su completed a kim possible mission to kiss a guy and still had another guy making her breakfast the next morning is the reason i don’t trust people😭😭😭 #LoveIsland pic.twitter.com/JxIzpIOUf5