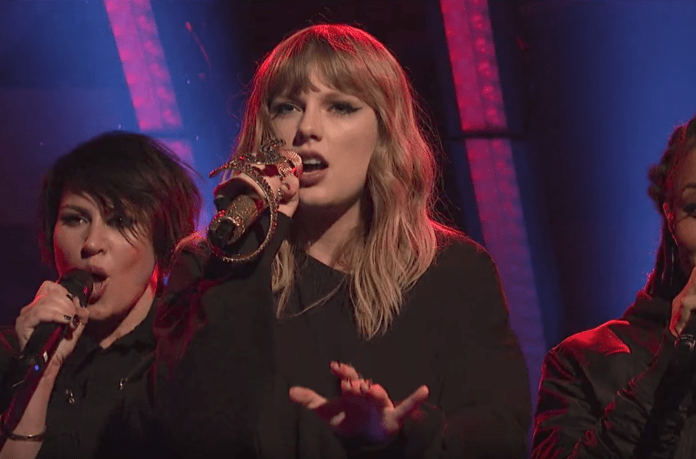 The star was widely anticipated to discuss the recent drama with the music boss in her performance, and while she did not call out the issue, fans are speculating that subtle digs were made.

The Lover singer opened her performance set with her brand new track The Man, the lyrics of which are speculated to be about her ongoing and years-long feud with Scooter.

I honestly have ZERO words for what #TaylorSwift just did for me & I’m sure you, too! @taylorswift13 has broken all the barriers & she IS the #ArtistOfTheDecade! #TaylorOnAMAs was better than I could’ve even imagined. Then again, that’s her! ❤️#AMAs2019 ❤️ pic.twitter.com/TS7xglADT0

“I’m so sick of them coming at me again / ‘Cause if I was a man, then I’d be the man / They’d say I hustled, put in the work / They wouldn’t shake their heads and question how much of this I deserve,” they read.

Taylor also performed alongside a young girl, symbolising her young self who signed away ownership of the master records of her albums made before 2018 as part of her deal with Big Machine Records in 2005.

During the performance, the background lit up to look exactly like Big Machine Records’ logo.

Staying back and watching you shine, for the last 13 years and I can´t wait for hundred more ????@taylorswift13 #AMAs #AMAs2019 pic.twitter.com/XP4nSgaAxB

Her 13 year contract with the label expired in November 2018, and Taylor recently called out the label in an explosive statement alleging that they were barring her from performing any of her songs that they own the rights to.

Taylor described the events as some of the most difficult she has had this year.

Speaking during her acceptance of the Artist of the Year award, she said: “I really don’t have anything articulate to say.”

“The past year of my life has had some of the most amazing time and also some of the hardest things I’ve gone through in my life, and a lot of them haven’t been public.”

“Sometimes people who do what we do… you feel like your stock is either up or down, but the people who hang in there for you are the ones you will never forget.”

Big Machine Records have denied claims that they attempted to block Taylor from performing her back catalog saying that the narrative she has created doesn’t exist.

Taylor did perform renditions of her older hits at the AMAs, including Love Story and Shake It Off.

During Shake It Off, she shared the stage with Halsey and Camila Cabella, both of whom stuck up for Taylor amid the drama.