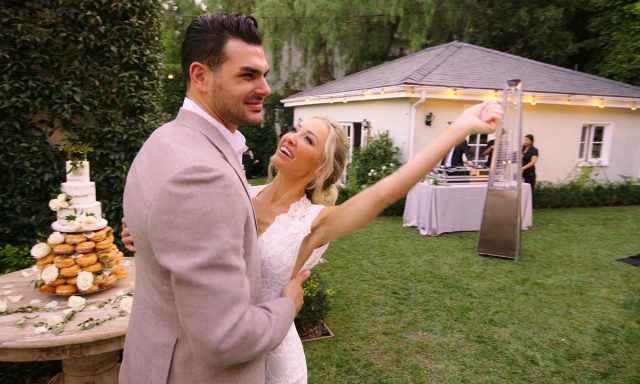 Selling Sunset star Mary Fitzgerald has slammed claims she ‘faked’ her wedding for the show.

Earlier this month, TMZ reported that Mary and her husband Romain Bonnet legally married at a courthouse on March 9, 2018 – over one year before they exchanged vows on Selling Sunset.

After the news hit headlines, Mary was accused of faking her entire wedding for the cameras, but the 39-year-old has insisted their nuptials was “absolutely real”.

Speaking on Fubar Radio, Mary explained that they legally married for “personal reasons” in 2018, before they decided to host their “real wedding” in October 2019.

She said: “Our wedding was absolutely real. We invited all of our friends and family. We didn’t tell anybody. We just signed the paper for personal reasons and then we wanted to wait until we could have our real wedding.”

“Romain’s never been married before. A wedding didn’t mean that much to me. I was happy to just go on a beach in Bali and I tried very hard to do that actually. No cameras, no anything, just our closest friends.”

Explaining why they waited so long to host their “real wedding”, Mary said: “Two of my really close friends, Nicole who was the officiant and who signed as the witness, she was trying to get pregnant and then one of my other friends were too, and they can’t go…”

“So I was like, I don’t want to do that. And so we just waited until we could plan and do the wedding like we wanted.”

Addressing the controversy surrounding their wedding, the real-estate agent said: “It’s not that big of a deal. They’re like, ‘The show’s fake, this is all fake.'”

“We’re like, what are you talking about? You see all of our family! How can you fake that? That was our wedding! People sign a certificate all the time before they do their actual wedding.”