An exclusive look at Amy Huberman’s character in RTÉ’s Striking Out has been released.

Amy plays a high-powered solicitor named Tara, who finds her fiancé cheating on her with a co-worker on her bachelorette night.

She wanders the streets of Dublin aimlessly all night – barefoot, tearful and devastated.

Goss.ie spoke exclusively to Amy about how she prepared for the role of Tara in Striking Out.

She said, “I think with the emotional stuff, you just have to go into your own well. You put yourself in the situation.

“For the personal stuff, as an actor, there’s so many situations that you’ll be in that you haven’t personally been in.

Heartbroken: Tara stands beside the Liffey in tears | RTÉ

She also added, “If you have empathy as a person you can put yourself in that situation, and go for it.”

In Striking Out, Amy acts one scene out in her underwear, Goss.ie asked her how she felt about being that exposed on camera.

“If a story needs for it and it’s right within all of it, then it’s just a part of the story that you’re telling.”

After wandering the streets of Dublin all night, Tara goes to her workplace to clear out her office.

A young client named Ray, who she’s representing in court that day, helps her with her belongings.

Striking Out airs on Sunday January the 1st at 9.30pm on RTÉ One. 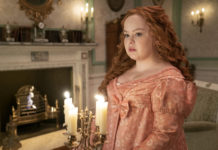