The promo for tonight’s episode of Love Island left fans reeling last night, as it appears Adam Collard has been keeping a massive secret from his partner Rosie Williams.

In the teaser, Rosie appears to confront Adam about a huge secret he’s been keeping, and fans are dying to know what she’s talking about.

The Welsh solicitor asks the 23-year-old fitness fanatic, “Do you want to tell me something? Something that happened today that you should have perhaps had the balls to tell me before.”

Looking embarrassed in front of all the other Islanders, Adam asked, “What you on about?” 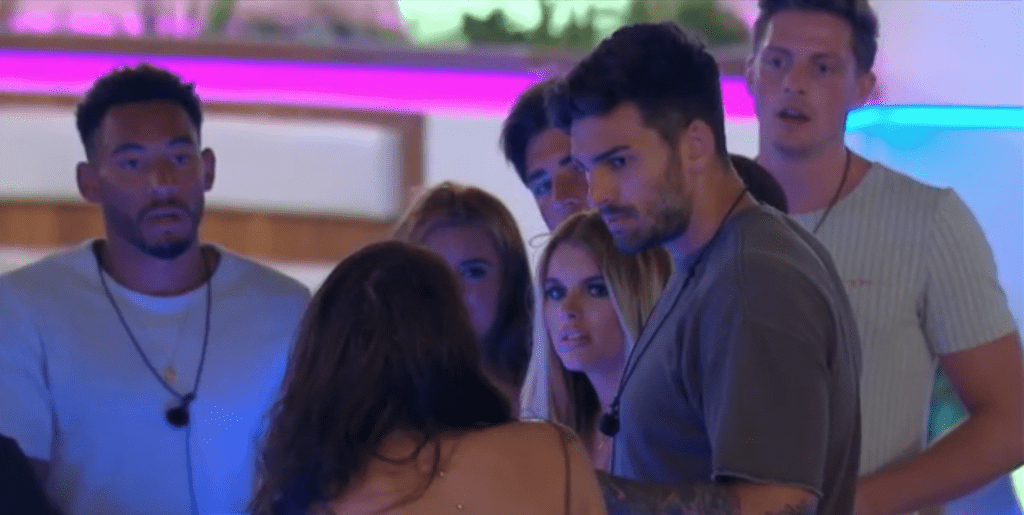 And Rosie snapped back, “I dunno, what am I on about? Everyone else in the group knows about it, you may as well share it. The group’s waiting.”

What ever the secret is, Rosie seemed pretty devastated in the promo clip as she broke down in tears while saying, “I don’t get why I’m not enough for someone…”

Since the teaser clip aired, fans have been trying to figure out what Adam did – and some believe he may have sent a cheeky text to new girl Megan.

I have a feeling that on the sly Adam text Megan and Rosie caught him???? #LoveIsland #WhatDidAdamDo

I bet my full wage that Adam text one of the other girls and Rosie found out.. more than likely he text Megan. ????#whatdidadamdo #loveisland

I bet Adam has either been texting Megan on the sly and Megan told Rosie or Adam enjoyed Hayley licking his earlobe a little too much and wanted more. Or it could be that he regretted picking Rosie over Kendall? I can’t wait to watch but it is kinda karma for both #LoveIsland

My theory is…. Adam’s ego couldn’t stand that Megan didn’t pick him for a date, so he has tried it on with her and to Adams surprise not everyone on earth fancies him so she turns him down and, like a good egg, Meg gives Rosie a heads up ???? #loveisland

#LoveIsland #Podictions
Theory – Adam has been messaging another islander (Megan) when he’s coupled up with Rosie and that’s whats gonna go off tomorrow ????

One viewer tweeted, “I have a feeling that on the sly Adam text Megan and Rosie caught him,” while another added, “I think Adam has text Megan at 4am asking if ‘she’s up’ whilst in bed with Rosie.”

Viewers haven’t been too happy with Adam’s actions in the villa so far, as he harshly dumped Kendall Rae-Knight before quickly moving on with Rosie.

Either way, we can’t wait to tune in tonight at 9pm on 3e.

Me tuning in tomorrow to find out what dafuq Adam has done #loveisland pic.twitter.com/WoeH7IeIfv

Going to bed thinking what Adam has done to Rosie #loveisland⁠ ⁠ pic.twitter.com/ONXUMtpDDf