Boyzone star Keith Duffy has revealed he’ll have to undergo surgery to deal with injuries from reality show Splash!

The Dublin singer has caused intense damage to his shoulders after taking part on Tom Daley’s ITV diving series.

“Unfortunately I hurt my shoulders diving, they’re still actually very sore. I think I’ve damaged the rotator cuffs in both of my shoulders,” he said.

“It’s an ongoing problem, I think I’m going to have to have some keyhole surgery done to be honest.

Aches: Keith injured his shoulder while training for the show | ITV

The 40-year-old ended up earning third place on the diving series, which has now been cancelled.

And despite mixed reviews about the bands vocals, Keith still maintained that Voice of Ireland coach Rachel Stevens was “absolutely gorgeous”.

He added: “It was quite bizarre, like Rachel Stevens still looks absolutely gorgeous she looked brilliant but one or two of the others I wasn’t quite sure.” 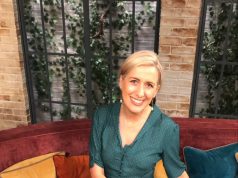