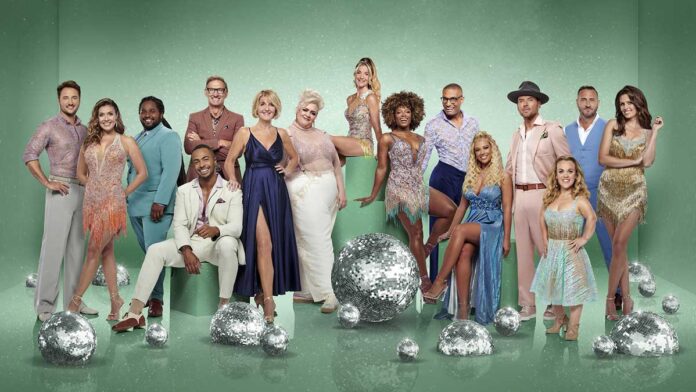 Each of the 15 couples then took to the dance floor to show judges Craig Revel-Horwood, Motsi Mabuse, Shirley Ballas and Anton Du Beke their skills.

None of the couples faced elimination in the first week; but this weekend, one of the celebrities will sadly be the first contestant to leave the competition. According to BonusCodeBets, a 32-year-old male TV presenter is most likely to life the coveted glitterball trophy at the end of this year’s Strictly Come Dancing.

Countryfile front-man Hamza Yassin, who is partnered with pro dancer Jowita Przystal, fits this profile to a tee.

TV presenters are the most successful professional, on par with actors, with six previous winners including Stacey Dooley and Ore Oduba.

Sportspeople are the third most successful profession with three previous wins, alongside musicians/singers.

If Hamza doesn’t claim the glitterball trophy, BBC presenter Richie Anderson is the next most likely to win, at the age of 34 and matching the top gender and profession.

Molly Rainford’s victory on the show would make her the youngest winner in Strictly Come Dancing history at 21-years-old.

However, history could repeat itself if Arsenal legend Tony Adams won the contest, making him the joint oldest celebrity to lift the trophy at age 55.

A spokesperson for BonusCodeBets said: “With 19 years of Glitterball winners to analyse, the key characteristics of a successful contestant clearly holds a bearing on who lifts the trophy at the end of the 12 weeks.”

“When placing a bet on this year’s show, the historical data is well worth considering, despite the bookmaker’s predictions this year. Presenter Helen Skelton is current favourite at 7/2, but looking back through history, punters may want to look toward Countryfile presenter Hamza Yassin at 33/1 – that’s pretty good value.”

On Saturday, Hamza and Yassin will Jive to Blinding Lights by The Weeknd.

Meanwhile, Tyler West and Dianne Buswell will also dance the Jive to Hit The Road Jack by Buster Poindexter.

Two couples will dance the Quickstep; Giovanni Pernice and Richie Anderson will dance to Dancin’ Fool by Barry Manilow, while Molly Rainford and Carlos Gu dance to Love On Top by Beyoncé.

Two couples will bring the Viennese Waltz to the dance floor; Kym Marsh and Graziano Di Prime will dance to Runaway by The Corrs, and Fleur East and Vito Coppola will dance to Glimpse of Us by Joji.

Ellie Taylor and Johannes Radebe will dance the Paso Doble to Les Toreadors by Georges Bizet.

Matt Goss and Nadiya Bychkova will take the Samba to the dance floor on Saturday night, with Night Fever by Bee Gees.

Fan-favourites Will Mellor and Nancy Xu will dance the Salsa to Never Too Much by Luther Vandross.

Helen Skelton and Gorka Marquez will dance the Cha-Cha to Rain On Me by Lady Gaga and Ariana Grande.

The final two couples will take the Tango to the dance floor Jayde Adams and Karen Hauer will dance to Rumour Has It by Adele, while James Bye and Amy Dowden will dance to Bad Habits by Ed Sheeran.