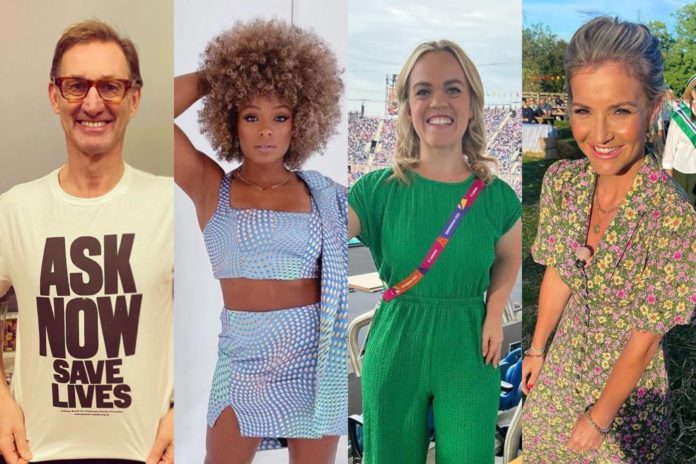 The full line-up for Strictly Come Dancing 2022 has been revealed.

The series will return to our screens on September 7, with judges Craig Revel Horwood, Motsi Mabuse, Shirley Ballas and Anton Du Beke.

A total of 15 celebrities are taking part in this year’s show, hoping to impress viewers on the dance floor.

Soap star Will Mellor was the first name to be announced for the Strictly Come Dancing 2022 line-up.

The 46-year-old is best known for his roles in Hollyoaks and Two Pints of Lager and a Packet of Crisps, although he briefly played Harvey Gaskell on Coronation Street.

Speaking on BBC’s Breakfast, he revealed he was “chuffed” to be taking part in the show, after agreeing to sign up because of a vow he made to “grab life” following the death of his father in 2020.

Coronation Street star Kym Marsh was the second celebrity confirmed to be taking part in the 20th series of Strictly Come Dancing.

“I’ve considered doing Strictly for years but the timings never worked out. I’m so delighted that this year they have!,” the actress said, speaking on BBC’s Breakfast.

The former Hearsay singer revealed she has “respect” for any criticism that may come from the four Strictly judges.

Radio and TV presenter Richie Anderson said it was his “dream come true” to compete in BBC’s Strictly Come Dancing.

“I cannot wait to get in those sparkles and sequins and shimmy across the most famous dance floor in the world!,” he gushed.

The BBC Radio 2 DJ will be half of the second all-male partnership in the show’s history, following in the footsteps of 2021’s Johannes Radebe and John Whaite.

Richie said, “It’s also a massive honour to be part of an all-male dance partnership, it’s so important we have that inclusion on such a huge show.”

Loose Women panelist Kaye Adams announced live on air that she would be taking part in Strictly Come Dancing 2022.

The “very serious” journalist and presenter “wants to show her fun side” over the course of the dancing contest.

“I could think of a million reasons not to do this. I nearly exited from both ends of my body at the thought of doing it,” the 59-year-old joked with her fellow panelists.

“But I thought to myself, ‘Am I going to be sitting there at the end of September and regret [not taking part]?’”

She was awarded the 2014 Funny Women award, as was a nominee for Best Newcomer at the 2016 Edinburgh Comedy Awards.

“I cannot begin to express the emotions I am feeling, this means so much to me and my family. I’ve always watched it, apart from a brief hiatus in 2011 as I was relentlessly gigging every weekend [to try and get on Strictly.] I’ve been a massive fan of the show for years.”

She admitted: “I’m a tad nervous too, well more than a tad… I’m absolutely petrified! To be asked to be part of the Strictly family is just so exciting and I cannot wait, it’s going to so much fun.”

Presenter and radio host Tyler West was “gassed” to be joining the Strictly Come Dancing 2022 line-up.

Tyler is best known for hosting weekday afternoons on KISS, for which he was nominated for a prestigious ARIA for Best New Presenter in 2020.

“It’s a show that means so much to me and my family and I can’t wait to seriously shake a leg on that shiny dance floor… with a side of sequins,” Tyler admitted.

Music legend Matt Goss is both “nervous and excited” to shake his tail feathers during the 20th series of Strictly Come Dancing.

The chart-topping singer has enjoyed mega success as the frontman of BROS, with their debut album ‘Push’ going platinum seven times.

Matt is now a solo artist and best-selling author, and he is about to release his solo album, ‘The Beautiful Unknown’.

Over the last decade, the 53-year-old has had a record breaking residency on the Las Vegas strip, and has also received the revered ‘Icon Award’ and has even been given his own ‘Matt Goss Day’ on August 8 – which amazingly is his late mother’s birthday.

Comedian and actress Ellie Taylor was announced as the ninth contest in the Strictly Come Dancing 2022 line-up.

The ‘Ted Lasso’ star said: “Well, cover me in fake tan and roll me in sequins! I’m absolutely over the moon to be a part of Strictly 2022!”

“I’ve watched the show for years so to be able to take to the dance floor is a dream come true, for both me and mum who is a Strictly superfan!”

“At the moment I’m focusing on the excitement and glitter and choosing to ignore the fact that I have the dancing ability of a newly born giraffe. Bring it on!” the ‘Mock of the Week’ star joked.

Molly appeared in the sixth series of Britain’s Got Talent which saw Ashley and Pudsey crowned the winners, and finished in sixth place.

The singer said: “I’m so excited to be part of Strictly Come Dancing!”

“I’ve watched it for years and can’t wait to meet the pros and the others taking part! I can’t wait to learn the moves and get dancing!”

Taking to his Twitter to announced the news, he wrote: “So… I’m officially swapping my battered old football boots for the ballroom shoes!”

“The lure of the sequins was simply too much! I am thrilled to be a part of the 20th anniversary of [Strictly Come Dancing] this year.. I can’t wait to meet my partner and get dancing #Strictly.”

Tony played with Arsenal in the Premier League from 1992 until 2002.

The X Factor star Fleur East will compete in the 20th series of Strictly Come Dancing.

The 32-year-old said: “I’m equally nervous and thrilled to be part of this year’s Strictly line up. I’m excited to learn new skills and I want to soak up every moment of this magical experience.”

“It’s such an honour to be on the show after years of watching it with my Father who loved it so much. Unfortunately my Dad is no longer with us but I know he will be watching over the ballroom in spirit.”

The singer came runner-up behind Ben Haenow in the 2014 series of The X Factor.

The wildlife cameraman, who also stars on ‘Animal Park’ and appeared on the CBeebies shoe ‘Let’s Go for a Walk’ admitted that his dance skills are “currently at the level of ‘1970s disco vibe.’”

‘I’ve been watching it for years and I can’t believe I’ll actually be there dancing live in front of the British public.”

TV presenter Helen Skelton was the 15th and final contestant confirmed for the 20th series of Strictly Come Dancing.

“I’m really excited to get stuck into a fun adventure,” she admitted.