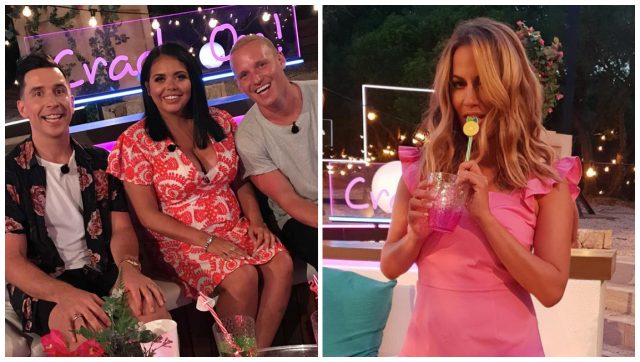 Scarlett was wearing a printed low-cut dress, which ended up showing the front of her bra for the duration of the programme.

Viewers took to Twitter to claim that Caroline was breaking girl code by not telling Scarlett about the wardrobe malfunction during the ad-breaks.

#GirlCode why is no one telling Scarlett Moffat that she is flashing her bra, poor lass! #LoveIsland

Some one be a gem & tell @ScarlettMoffatt her bras out! #girlcode she looks beaut though! #loveisland #aftersun

Some viewers also commented on the 27-year-old’s appearance due to her unfortunate wardrobe malfunction, with a lot of hateful tweets being written about the guest.

Scarlett is no stranger to online trolls, and has dealt with comments on her appearance since she first appeared on Gogglebox.

The Love Island Aftersun panellist took to Twitter after the show to express her disgust at some of the comments she received.

I’m honestly ashamed of some people on here. Hard to pretend I’m ok and be a good role model to others about how it’s ok to just you when the comments from grown adults on here have resulted in me crying my eyes out! I hope you’re very proud of yourselves

Scarlett went on the write that body-criticism needs to stop, and called for a change in society.

When I saw you today you looked 🔥🔥🔥🔥 and were (as ever) the sweetest most approachable individual out there! Sleep well knowing how little the trolls matter! YAS KWEEN (of the jungle)

Babe I can feel this so much. Happened to me yesterday I broke down. From one strong lady to another; we’re better than that. Can’t even give any advice Cus I know whatever is said doesn’t change the way it’s upset you. All I know is that you are better than words. X

I think it’s embarrassing that anyone would want to bully someone to sell papers/ clickbait/ drive their own ego. I’d like to think that any decent person would look to who writes this kind of stuff and blocks them from their social etc.
Ur brilliant & ur family must be so proud

You were BRILLIANT tonight. And lovely to chat after ❤❤❤

The Love Island finale will air tonight at 9PM on 3e.