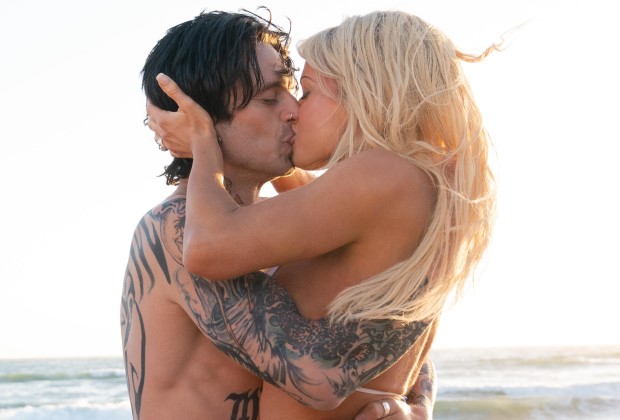 The couple got married in 1995 after only knowing each other for 96 hours, and they made a sex tape on their honeymoon – which was later stolen and distributed online.

Seth Rogen, who is also an executive producer on the series, stars as the man who allegedly “stole” the couple’s infamous sex tape.

The first three episodes joined Disney+ earlier this month, and the series has received rave reviews from viewers so far.

Check out some of the reactions below:

You’re telling me Disney+ abandoned the Lizzie Maguire reboot because it involved sex but they’ve gone and paid someone to play the voice of Tommy Lee’s penis in Pam & Tommy. pic.twitter.com/QW6Hz8f8uk

Finished PAM AND TOMMY & it was AMAZING. Sebastian Stan & Lily James are PERFECTION. The soundtrack, camerawork, direction are all great. Consent discussions? Yes please. But above all it gave me a new respect 4 Pamela Anderson. The whole planet owes her an apology#pamandtommy pic.twitter.com/N6XpSYdlMH

sebastian coming each day to pam&tommy set and pick what color of tong he was wearing that day pic.twitter.com/w6tvsGjZNH

I just watched “Pam And Tommy” and I think my Hulu now has chlamydia. It burns when I stream.

me 20 mins in watching pam and tommy pic.twitter.com/CU5iOMSXVw