Charlotte Crosby has gotten cryptic about the future of Geordie Shore.

Speaking to Goss.ie at the Irish launch of her makeup brand Flique with Easilocks, the blonde beauty revealed all.

The Newcastle lass says that she doesn’t think many of the original members will be in the show for much longer – this includes her ex Gaz Beadle.

“I feel like, Geordie Shore, there’s a lot of the old characters that I don’t think are going to be in it much longer.”

Original Members: Charlotte doesn’t think a lot of the original members will be in Geordie Shore much longer | VIPIRELAND.COM

Goss.ie also asked the reality star whether she would ever return to the hit series.

“If there was a reunion show, I’d pop my head in for the night. But I wouldn’t go back full time no.

“It was quite alright really. I just realised it was my time to leave because it was time to move onto other things.”

Speaking about her new show with boyfriend Stephen Bear called Just Tattoo of us, Charlotte revealed the strangest thing someone has gotten tattooed.

“So the tampon tattoo was really bad. There was a dirty tampon on somebody’s leg. But series two has so much worse. It’s brutal.”

She also revealed that they have wrapped filming season 2 and it will be on our screens very soon.

“That’s coming out sometime in October which I don’t think I’m allowed to say but I’ve said it. And we actually are planning series 3.” 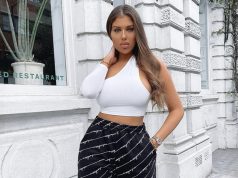