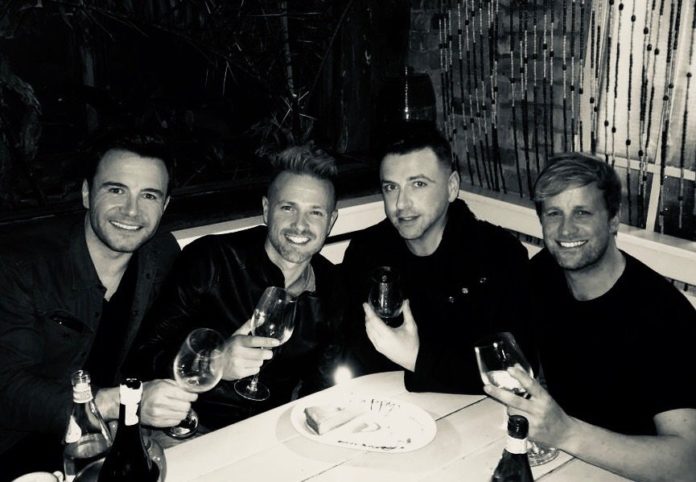 Westlife have responded to claims that Simon Cowell wanted them to reunite with Brian McFadden.

The band, who recently announced dates for their reunion tour next year, appeared at a press conference in Dublin this afternoon – where they opened up about getting back together.

When asked whether Brian was ever considered when it came to reunion talks, Shane Filan said, “Something that we’ll always want to put across is that there’s in anyway bad or ill-feeling towards Brian.”

“The way we look at it, we finished the band as a four-piece. We were together for about eight years after Brian left, you know, a lot longer than when we were with Brian. He decided to leave the band in 2004.”

“So I think for us, we’ll always be a four-piece after that. Even in the seven or six years we’ve had not as a band, we’re still a four-piece. When we came back we always felt, Brian left the band fifteen years ago.”

Mark Feehily added, “I don’t think we feel that anyone is missing. That’s not in any bad way, that’s just what Westlife is to us.”

Nicky Byrne went on to say, “Brian actually tweeted a lovely tweet and as Shane said there’s no ill-feelings. None of us have ill-feelings towards him.”

“I think it was nine or nine-and-a-half years without Brian and the dynamics in Westlife changed when Brian left because they had to. Five become four so in many ways, I remember saying that at the time, we all had to stand up to the plate anyway.”

“Vocally, personality and we grew up. When Brian left, Brian was the only one who had children, we were in our very early twenties and I’m forty last week. Time moves on and I want to put it on record again, there’s no ill-feeling.”

Nicky also slammed recent reports that Simon Cowell wanted Brian to be a part of their reunion tour.

He said, To put Brian back into the band, it would be strange for us to have to adapt to that. The stories and the rumours about Simon Cowell offering tours with Brian, it’s just simply not true.

“100% untrue, that never happened. We did meet Simon Cowell and it was one of those things where we discussed the band as a four-piece, it was never with Brian,” he added.