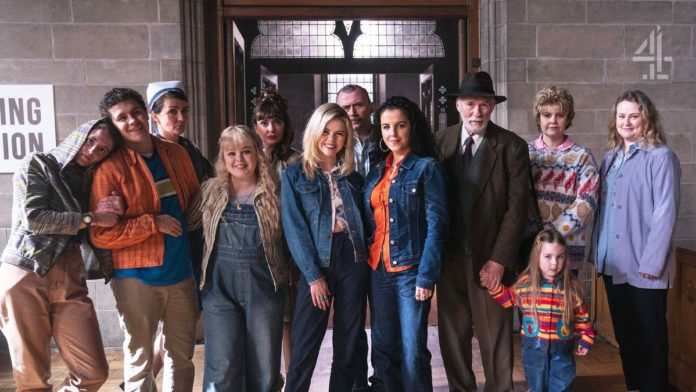 The last ever episode of Derry Girls aired on Channel 4 on Wednesday night.

The hit sitcom followed the lives of a group of friends in Derry, based during the Troubles in the 1990s.

Following the emotional season three finale on Tuesday night, the series concluded with an hour-long bonus episode tonight, which was set one year later.

Can’t believe it’s really over! What a series. What a show.

The episode took place in the days leading up to the 1998 Good Friday Agreement referendum in Northern Ireland, the same week of Erin and Orla’s 18th birthday party.

Filled with plenty of heartwarming moments, the episode came to an end at the polling station, before fast forwarding to present-day New York.

Viewers were shocked to see Chelsea Clinton opening the door to a postman delivering a letter from over 20 years ago.

Erin, Orla, Clare, Michelle and James had sent the letter to Chelsea in the series two finale, which was set around Bill Clinton’s visit to Derry.

Chelsea was shown reading the letter, which invited her to come hang out with them in Derry.

It’s safe to say viewers were shocked by the surprising cameo, and took to Twitter to praise the show’s perfect ending.

One viewer tweeted: “The power derry girls has to get a literal Chelsea Clinton cameo to close out the series…this show is truly unmatched.”

Speaking about her guest appearance on the show, Chelsea said: “Thanks to Lisa McGee’s incredible talent, and that of the wonderful cast and crew of Derry Girls, people around the world have been able to better understand and relate to a hugely significant and important period of history in Northern Ireland and for the world.”

also chelsea clinton cameo??? how cool is that #DerryGirls

“Like many, I am a big fan of the series, and I was honoured to be able to appear in the very special final episode. I hope people enjoy watching it as much as I enjoyed being a part of it!”

Liam Neeson also made a cameo in the final episode, which was widely praised on Twitter.

The actor previously starred in the first episode of season three as Chief Constable Byers, and reappeared at the end of the bonus episode as his character voted in the referendum.

Check out more reactions to the final ever episode of Derry Girls below:

Sometimes there are no words that can adequately capture the emotion and significance of something as horrific as Bloody Sunday or important as the Good Friday Agreement. Liam Neeson does it with no words at all. Floored me. Peace in Northern Ireland MUST be protected #DerryGirls pic.twitter.com/xMoJTt1A6C

A moment of appreciation for Tommy Tiernan’s dance moves in tonight’s #DerryGirls pic.twitter.com/yMPXKDoW08

#DerryGirls This shot says it all. Peace in Northern Ireland must be protected. pic.twitter.com/pD4GqljPpB

Just poignant. Every emotion captured in one scene. The genius of #DerryGirls will never be forgotten. pic.twitter.com/7BT3pTeOUr

Given Bill Clinton’s role in the peace process Chelsea Clinton was kind of the perfect cameo but for me these two pictures just capture the emotion perfectly. Liam Neeson’s face said it all. I had to go back & watch that part, just perfect! Well done Lisa McGee! #DerryGirls 💚😢 pic.twitter.com/CsHYe75A4n