Una Healy has reunited with her children, after they travelled oversees to see their father.

Taking to Instagram, the Saturdays star shared a photo with her children in her hometown of Thurles in Co. Tipperary, captioning the post: “💗.”

Ben lives in New York with his wife Jackie Belanoff-Smith, who he married in 2019 after a whirlwind romance, and their daughter Farrah.

Tadhg and Aoife-Belle were due to spend their summer holidays in the US with their father, but Covid-19 restrictions threw their plans into chaos.

Back in July, Jackie revealed the children were turned away at the airport.

She wrote in a lengthy Instagram post at the time: “For anyone who asks why my two stepbabies are not with us this summer… here’s the nightmare we’re currently living.”

“I currently just spent the past month organising their trips over to the US – getting tickets booked, hours on the phone with Aer Lingus making sure their stepmother can bring them over… booking their ESTA’s etc.”

“Ben can’t travel because he’s getting his greencard processed and can’t leave the country.”

Jackie explained: “I take the red eye to Dublin last night. When I checked in at JFK the attendants check on the kids return flights. Everyone was made aware of my plans to turn right back around with my stepkids. I pick them up in Dublin today only to have their tickets blocked by immigration.”

“An hour at check in trying to get them through and then another 1-2 hours stuck in immigration offices only to be told there is a ban on EU citizens and there’s nothing possible we can do other than fly to Turkey or Mexico quarantine for 14 days and then bring them over from there.”

Jackie continued: “Having to break these poor babies hearts who had their hopes up for a fun summer with their dad and sister, we are all not okay right now.”

“Una was a rockstar with them, they were on the phone with their dad. Both Una and he calmed them down. I am very much not okay and I am a complete mess.” 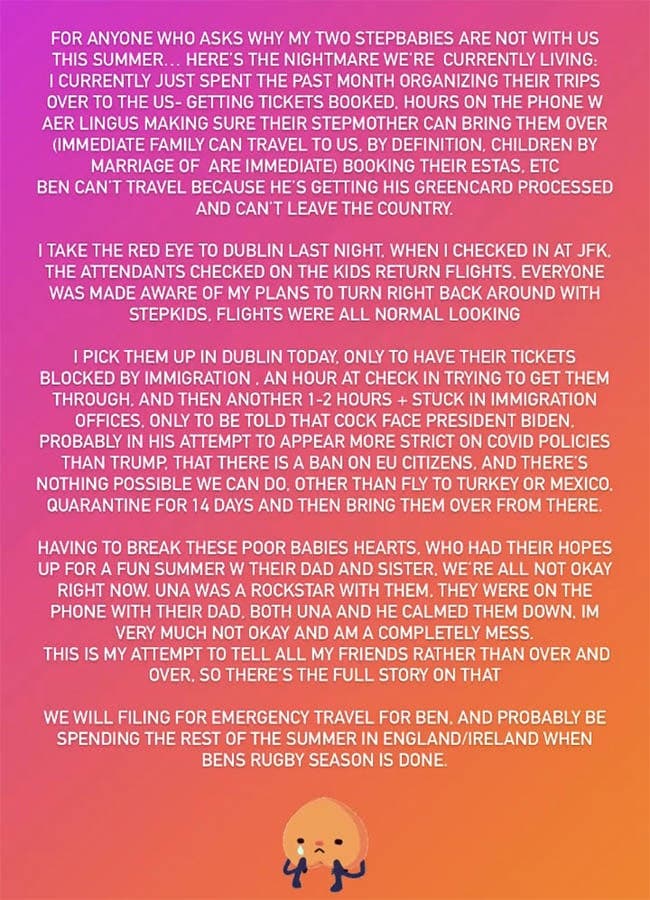 Jackie then added: “We will file for emergency travel for Ben and probably be spending the rest of the summer in England/Ireland when Ben’s rugby season is done.”

Una and Ben split in July 2018 after six years of marriage, amid claims he was unfaithful.

One year later, the rugby player married Jackie after just two weeks of dating – and the couple have since welcomed a daughter named Farrah.