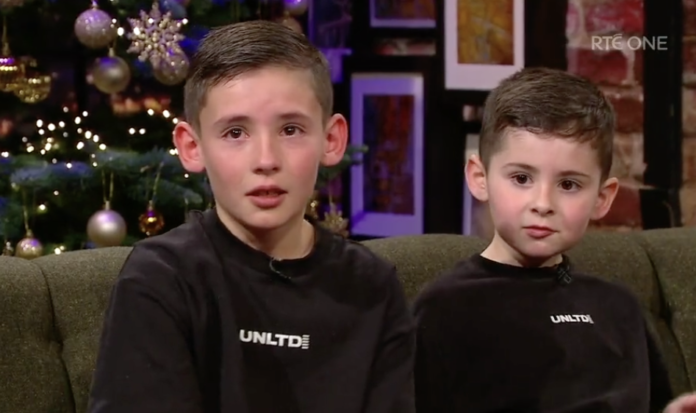 The breakout stars of this year’s Toy Show, DJ Calum and Hype-man Jackson, received an incredible surprise on The Late Late Show tonight.

The Kieran brothers reunited with Ryan Tubridy to discuss the amazing week they’ve had, after viewers fell in love with them on the show last Friday.

At the end of their chat, Ryan told them he had a video message from DJ Jenny Greene, who invited them to open for her next summer in the Iveagh Gardens with the RTÉ Concert Orchestra.

DJ Calum and Hype-man Jackson living the dream this week after securing their first big gig next year with @djjennygreene and the @RTE_Co.#LateLate pic.twitter.com/7tdOWEokgH

Astonished by Jenny’s offer, an emotional Calum said he was “so happy” through tears.

Calum and Jackson delighted viewers when they pumped up the volume with their energetic DJ set on the Toy Show last week, but it was what happened next that captured the hearts of the nation.

After Calum told Ryan Tubridy about his dreams of becoming a superstar DJ, the 11-year-old was surprised with brand new DJ equipment, which brought him to tears.

It’s safe to say viewers fell in love with the Kieran brothers, and the pair have been inundated with exciting offers since they appeared on the show.

The pair have been invited to DJ on FM104 this Saturday, and they were also asked to come on Tracy Clifford’s show on RTÉ 2FM this week to play some tunes.