Thousands gather at vigils across the country for Ashling Murphy 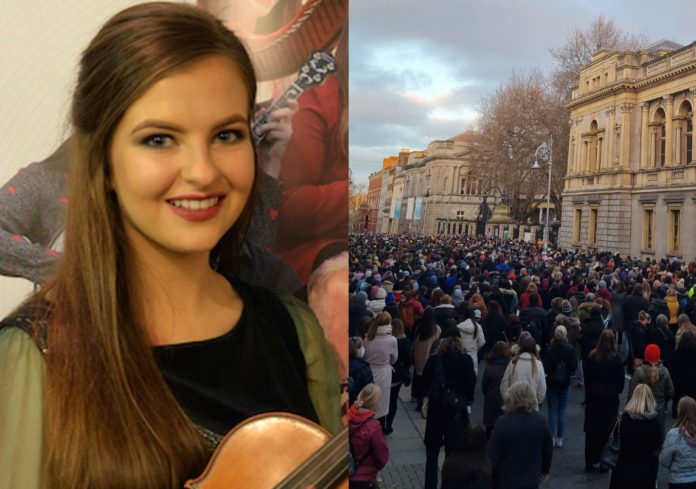 Thousands of people have gathered at vigils across the country for Ashling Murphy.

The 23-year-old was jogging along the Royal Canal in Tullamore, Co. Offaly on Wednesday afternoon when she was murdered in broad daylight.

Hundreds of mourners attended a vigil outside the Dáil in Dublin at 4pm, the same time Ashling was attacked, to pay their respects on Friday.

#VigilforAshling Very fitting to have traditional music playing during the vigil to honour Ashling Murphy. The crowd visibly moved & mirroring the nation coming together in solidarity @NWCI @Womens_Aid #EndViolenceAgainstWomen pic.twitter.com/9x4c3eLoQu

Incredible numbers of people at vigil to remember Ashling Murphy organised by @NWCI.

Silence from thousands gathered together in sorrow and anger at her murder and gender based violence. pic.twitter.com/5SQnKtWi0J

Musical and spoken tributes are being paid to Ashling Murphy at a vigil being attended by hundreds if women and men outside Dáil Éireann @rtenews pic.twitter.com/WmSiu7feyx

Musicians, including friends of Ashling Murphy, play to a crowd of thousands at the Dublin vigil. pic.twitter.com/gJ0n7d1egt

Huge crowds turn out for silent vigil at the gates of Leinster House for Ashling Murphy RIP. pic.twitter.com/6S0czYV0mW

Ashling, who worked as a primary school teacher, was a talented musician and traditional music was played at her vigil outside Leinster House this afternoon.

A number of people also delivered emotional tributes to Ashling, including one of her friends Grace Corrigan.

Vigils took place in counties across Ireland today, including Ashling’s hometown of Tullamore, with others planned for this weekend.

Attendees have been sharing photos and videos from the gatherings on social media, showing a country united in grief.

Thousands of people have turned out for a vigil in Tullamore for Ashling Murphy pic.twitter.com/76nw5UDr7r

Really poignant vigil at the O’Connell Monument in #Ennis today in memory of Ashling. Thinking of her family, friends and community. Well done to @Clare_Women for organising #VigilforAshling #AshlingMurphy pic.twitter.com/9ihMhRZtne

A beautiful vigil in Belfast to remember Ashling Murphy and to send messages of support to all who loved her.

Society is united in calling for an end to male violence against women.

🕯️Scenes from the vigils being held in Navan and Bettystown, Co. Meath this afternoon for murdered school teacher Ashling Murphy. pic.twitter.com/nafEVRiMCu

Attended a really poignant vigil along the banks of the Liffey in Lucan at 4pm to remember Ashling Murphy.
#shewasjustoutforarun 💔🕯💔 pic.twitter.com/daZyGEMDv5

Today, a candlelit vigil was held in Armagh as a gesture of respect for Ashling Murphy, who was brutally murdered. Violence against women must end, I stand in solidarity with the Murphy family, her friends, and women and girls around the country. #thismuststop#shewentforarun pic.twitter.com/xwBoINwjfv

Poignant moving candlelit vigil in Newry today as a mark of respect for the beautiful life of Ashling Murphy taken so senselessly. People are defiant and are standing in solidarity with the Murphy family, with women & girls across the country – violence against women must stop. pic.twitter.com/x6F8KJILhS

The vigil here in Tullamore has now begun.

“We are here today as support and to show solidarity to Ashling’s family” pic.twitter.com/bHFakY98VO

There has been an outpour of anger and sadness over Ashling’s death, as it has once again highlighted male violence against women in Ireland, and the danger and fear women face on a daily basis.

A man in his 40s was arrested in connection with the incident, but has since been released and ruled out as a suspect.

According to the latest reports, Gardaí have now identified another person of interest.