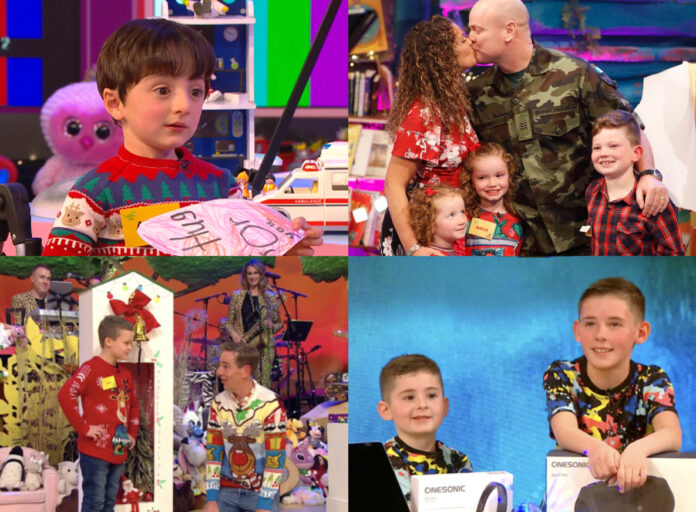 Ryan Tubridy will be back on our screens this Friday, November 25th, for what’s bound to be yet another fun-filled and tear-jerking show.

Ahead of the highly anticipated show, we have taken a look back at some of the most heartwarming moments in Toy Show history.

The Kieran brothers delighted viewers when they pumped up the volume with their energetic DJ set, but it was what happened next that captured the hearts of the nation.

After Calum told host Ryan Tubridy about his dreams of becoming a superstar DJ, the 11-year-old was surprised with brand new DJ equipment, which brought him to tears.

It’s safe to say viewers fell in love with the Kieran brothers, and the pair were inundated with exciting offers after they appeared on the show.

Due to the coronavirus pandemic, the eight-year-old didn’t have a crowd to celebrate the end of his treatment in hospital back in 2020.

So on the night, Ryan Tubridy invited him to ring the bell to celebrate being cancer free in front of millions of viewers.

Finn, who is a huge Lego fan, was also surprised with a trip to Legoland for him and his entire family.

Kellie Harrington made a surprise appearance on The Late Late Toy Show in 2021.

The Olympic gold medallist stopped by to surprise sport-mad kids Darcy and Poppy, who were shocked by her arrival on set.

And that’s not all, the lightweight boxer also gifted the girls two signed Olympics vests, as well as signed boxing gloves.

The young girl, who was born with Lumbosacral Agenesis, appeared on the show to discuss her favourite sensory toys.

After gushing about her mum Clare and “hilarious” auntie Mairead, Ryan revealed to Isabella that she and her family had been gifted a trip to Paris.

Who needs a (virtual) hug from Adam King right about now?#LateLateToyShow pic.twitter.com/4pMqwpEty6

Adam King’s appearance on The Late Late Toy Show in 2020 was one of the most memorable of the night.

The young boy, who suffers from Brittle Bones, melted the hearts of the nation with his sweet gesture upon meeting Ryan Tubridy, sharing with him his handmade ‘Hug For You’ heart.

Viewers were moved to tears by Adam’s excitement after being reunited with John Doyle, a hospital porter who made his visits to Temple Street’s Children’s Hospital.

Adam has since become a celebrity in his own right, and released his own children’s book last year with the help of his father David.

Another one of our favourite moments from the Toy Show in 2020 was when Dermot Kennedy surprised Michael Moloney.

The teenager is a huge fan of the singer, and appeared on the show to perform a version of his hit song Giants – which he dedicated to his late father.

Mid-chorus, Michael was flabbergasted when Dermot appeared on stage to sing with him.

Dermot also surprised the delighted teen with a recording session in Windmill Lane studios, and gave him a signed guitar backstage. What a legend!

Eight-year-old Saoirse Ruane from Galway captured the hearts of the nation on The Late Late Toy Show in 2020.

The brave young girl began suffering from a sore ankle in 2019 and after developing a limp, went to the doctors to run some tests. Saoirse was unfortunately diagnosed with a tumour, resulting in her leg being amputated.

She shared her story with Ryan Tubridy, who helped her to fulfil her three wishes. Her first wish was to appear on the Toy Show. Her second dream was to be walking by Christmas, leaving Ryan and viewers in awe as she stood up and took some steps on stage.

Finally, Saoirse wished to go on a family holiday when the coronavirus pandemic was over, and Ryan handed her a Golden Ticket for a trip of a lifetime to Disney World in Orlando, Florida.

When Ryan surprised Mia Farrell with a trip to Legoland

“We have a surprise for you Mia” – Ryan surprises Mia Farrell from Bluebell in Dublin who lives in a crowded house and needs a break #LateLateToyShow pic.twitter.com/3HXPcGRG5I

Back in 2017, viewers were in tears when host Ryan Tubridy highlighted the housing crisis in Ireland.

A young girl named Mia was invited on the show, and she explained that she lived in a crowded house with her extended family – because her mother couldn’t afford their own home.

Ryan then surprised her with a free trip to Legoland, thanks to Aer Lingus.

When Michael from Kerry met his hero Davy Fitz

There’s always so many stand out moments from the Late Late Toy Show, and this one from 2018 was pretty special.

Kerry native Michael O’Brien stole the hearts of the nation when he met his GAA hero Davy Fitz.

Ryan also surprised the 11-year-old with All Ireland final tickets.

When Ryan reunited two kids with their father

Adam and Kayla Burke from Middleton, Co Cork reunited with their dad Sergeant Graham Burke back from Mali where he has been completing his 6th tour of duty peacekeeping overseas #LateLateToyShow pic.twitter.com/HwqtCSwADR

One of our favourite Toy Show moments has to be when Ryan reunited the Burke family.

Admitting to the audience that this was his “favourite surprise”, Ryan hid father-of-two Graham Burke, who was working for the armed-forces in Mali at the time, in a huge Christmas present.

“Don’t let the bullies stop you from doing the things that you want to do”.#LateLateToyShow pic.twitter.com/8N7WXSlths

Sophia Maher won the hearts of the nation in 2019 when she spoke about bullying on the Toy Show.

The eight-year-old told Ryan about the bullying she faced daily because of her cropped hair cut, and he reminded her that “difference is a badge of honour”.

Sophia also urged other kids watching: “Don’t let the bullies stop you from doing the things that you want to do, because life would just suck if everyone was the same.”

When Ryan surprised ‘hero’ Scott – who saved his cousin’s life

“I wanted to save her life”

Back in 2018, a young boy named Scott was dubbed a hero following his appearance on the Toy Show.

Ryan revealed how Scott from Athlone underwent a bone marrow transplant to save his little cousin Grace, as she was suffering from leukaemia.

Scott was treated to an on-air meet and greet with his favourite rugby stars – including Rob Kearney, who said Scott was the “real hero” in the room.

After bringing the entire family and their cousins on set, Ryan also surprised them with a trip to Orlando, Florida.

When the Toy Show reunited another family for Christmas

Back in 2019, The Late Late Toy Show reunited another family for Christmas by flying 24-year-old Alex home from Australia.

Her younger brother Lee was demonstrating a bike on the show when he was surprised by his sister, who he hadn’t seen in three years.

When Ryan surprised little Sophie with a well-deserved trip

“If I was Cian, I’d want a big sister like you”. #LateLateToyShow pic.twitter.com/BWf7dB2odS

Viewers were moved by a young girl named Sophie on the Toy Show in 2019, after she revealed her 5-year-old brother Cian was in hospital with leukaemia.

Sophie then burst into tears when Ryan surprised her with a trip to London to see her favourite musical School of Rock, as well as a trip to visit the Harry Potter studios.

Viewers were left in floods of tears as Ryan told her: “If I was Cian, I’d want a big sister like you.”

Another sweet moment from the Toy Show in 2019 was when eight-year-old Tom Cullen appeared on the programme with his beloved Nanny Pat.

After Tom gushed about spending time with his grandmother, Nanny Pat made a surprise appearance on the show – warming the hearts of the nation.

One of the most memorable moments from the Toy Show has to be when Aimee Keogh was surprised by her idol Ed Sheeran back in 2014.

Aimee got the chance to sing with Ed, and he also announced that he was going to fly her and her family to London to attend one of his O2 concerts.

Three years later, Aimee was invited to sit in the audience during Ed’s appearance on The Late Late Show, where they both reflected on the emotional moment.

Back in 2013, Domhnall Ó Confhaol from Connemara was surprised by his hero Robbie Keane, while he was recovering from an operation on his Achilles tendon.

Ryan asked Domhnall what he would say to Robbie if he met him, and he said: “I’d hope he’d be better quick, because I think we really need him for the 2016 Euros… he’s like the main man for us.”

Robbie then appeared onstage, leaving the eight-year-old in disbelief.