Suzanne Jackson has fiercely defended her younger sister Katie, after she was targeted by a ‘toxic’ Facebook group.

The influencer’s 20-year-old sister was left in tears this afternoon, after someone started “spreading lies” about her in a closed Facebook group, which has over 30,000 members.

Sharing a screenshot of her little sister crying over the incident, Suzanne wrote on her Instagram Story: “To that awful person who has nothing better to do with their time than drag people down on some toxic fb page… get a life!!! Seriously!”

“Stop spreading lies & go watch my sisters story @katie_jackson12 for the TRUE explanation and you a girl who has a heart of gold!” 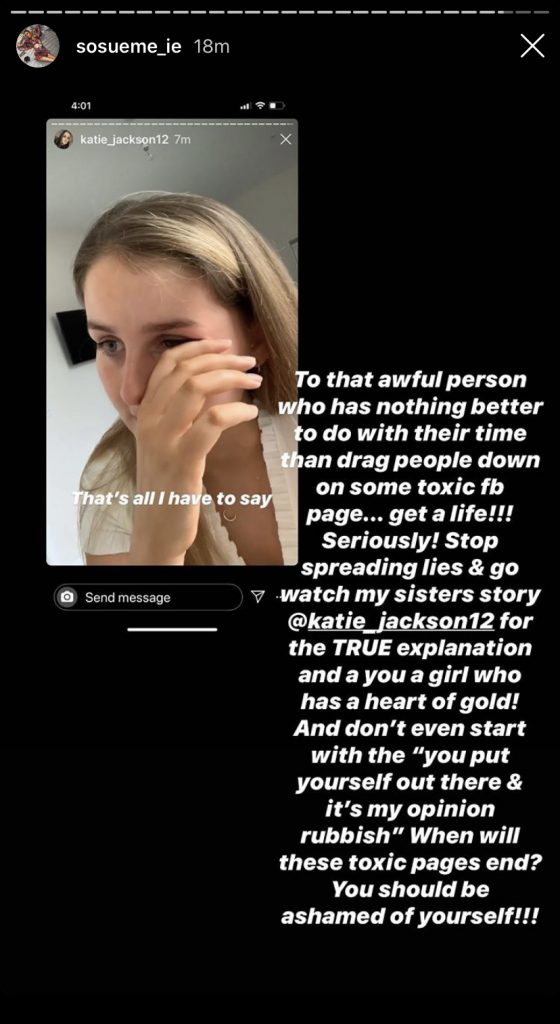 “And don’t even start with the ‘you put yourself out there & it’s my opinion rubbish’ When will these toxic pages end? You should be ashamed of yourself!!!” Suzanne added.

On Katie’s own Instagram Story, she explained: “This morning I was made aware of a post that went up on a private Facebook page about me, this Facebook page has over 30,000 members and it’s basically just people talking about influencers and bloggers, and anyone on social media with a platform.”

“I just want to come on and clear up the lies, because the post that went up that was made about me is wrong, and I’m just going to tell you the story now so that I can clear myself up and clear the lies that’s been made about me,” she said.

“I did try and request access to the page, but they’re not giving it to me. And I can’t imagine that they’re going to let me on to defend myself, so I wanna do it here on my stories.” 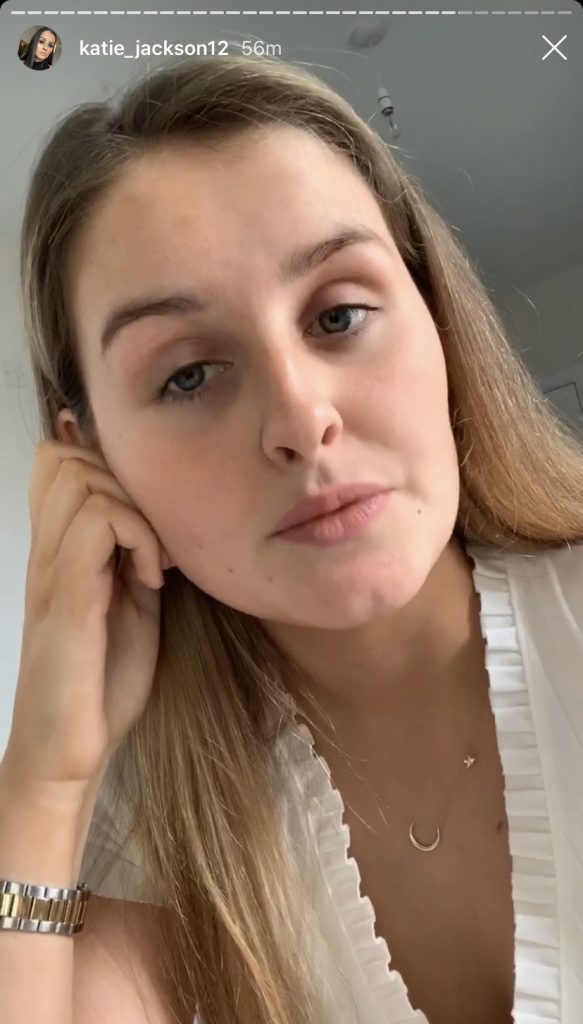 Katie then shared the post that was put into said Facebook group, which said: “I’m not being a moany arse here as this is a legit question.. I questioned Katie Jackson last night about it.. on her page there was a Go Fund Me page for small Irish/blogger businesses in which Katie NOMINATED a makeup artist.. now can I ask.. WTF is someone promoting a GFM giving money to a blogger/makeup artist at this time.”

Katie then explained: “So I was asked to nominate an Irish business that I thought deserved a small share of money that was raised on a GoFundMe page, and I decided to nominate a page called SimplyFitFood.”

“They have healthy meals and they deliver them to you… And at the moment in this crisis, they are delivering meals to healthcare workers, and to anyone who is working in the test centres during this crisis.”

“This woman came into my DM’s and thought it was quite ridiculous that this GoFundMe page was up and running, and I just told her why it was made… and I told her who I was giving my share of the money to, and that was Simply Fit Food,” Katie said. 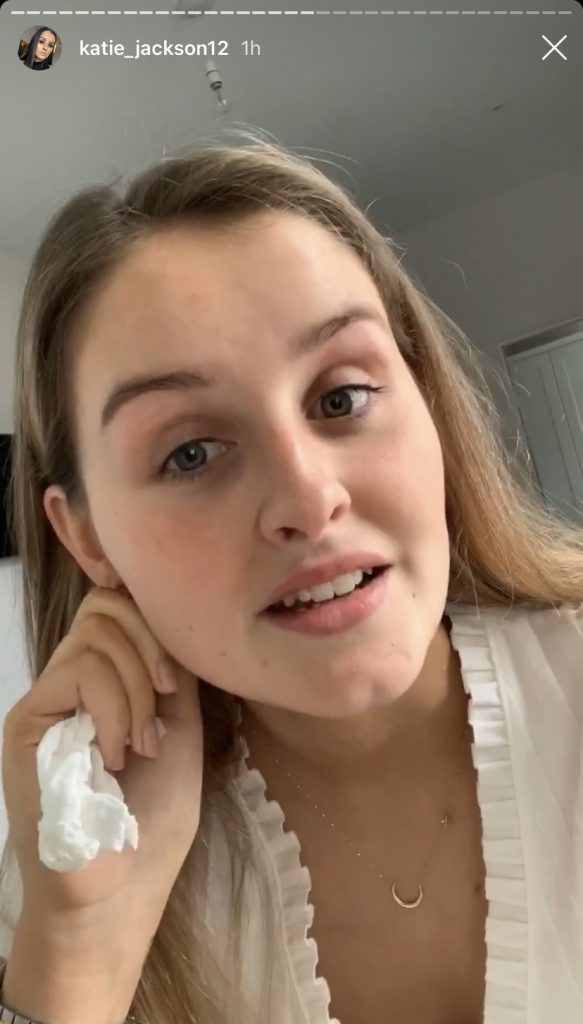 “So I will put up the messages now, because I just don’t know where the makeup artist came from.” 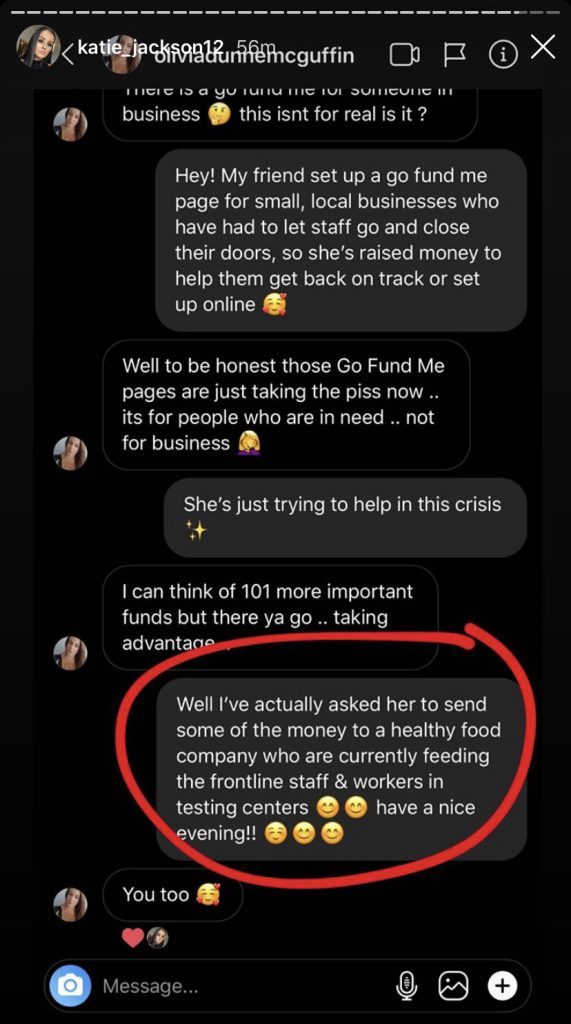 Getting emotional, Katie said: “And I also have messages with Simply Fit Food, of me asking the owner Evelyn if she would like the money to help feed the healthcare workers… I’m just so angry.”

Through tears, the 20-year-old added: “Sorry I didn’t wanna get upset on my stories, because I don’t want to bring any negativity to anyone.”

“But I just wanted to clear up that, and set the story straight.” 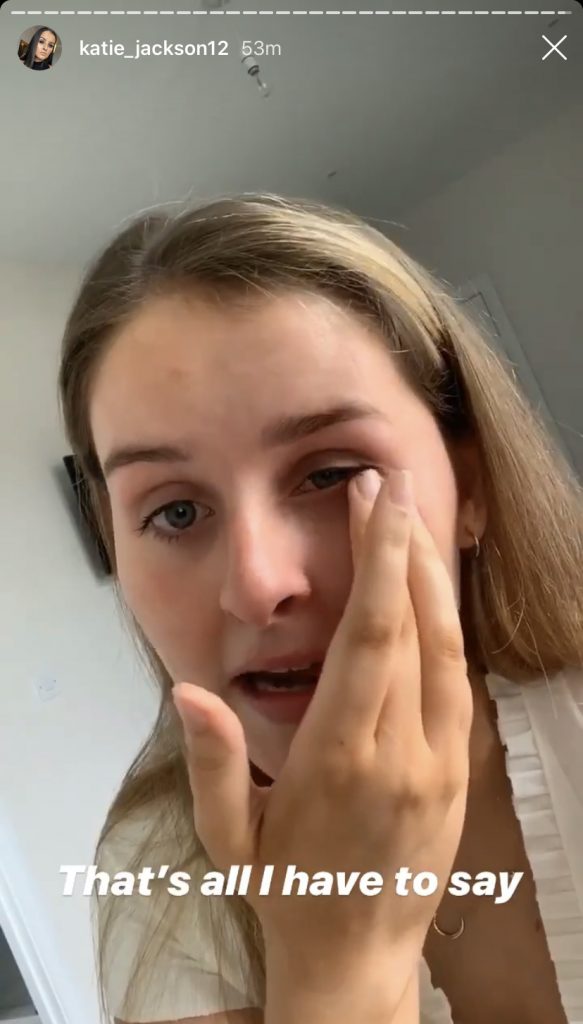 On episode 40 of the Gosscast, we talk Matt Damon’s Irish isolation, celeb breakups and hookups, plus the latest Maura Higgins & Curtis Pritchard drama

Remember, for bonus episodes of the Gosscast with one on one interviews, sign up to our Patreon here: Become a Patron!