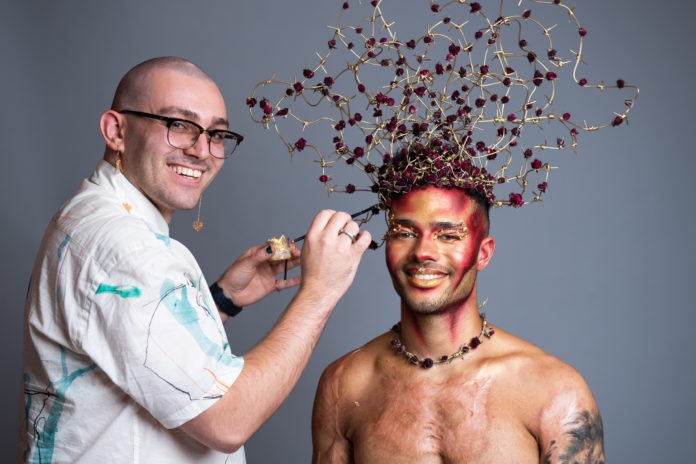 For this week’s Spotlight On feature, we spoke to makeup artist Glen Edward.

The 28-year-old became the first ever winner of RTÉ’s brand new show Glow Up Ireland earlier this week, winning a full professional makeup kit and €5,000 in prize money to help further his career.

Following his win, the Liberties native spoke exclusively to Goss.ie about how he got into makeup, his time on the show and what’s next for him.

When did you first decide makeup and design was something you wanted to pursue?

When I was 15 going on 16, I was in BeLonG To youth services – they’re an LGBT youth group in Dublin and now they function all over Ireland. We did a workshop on makeup and drag with Veda, who performs in The George, and she has the whole HIV positivity anti-stigma campaign at the moment. We did a huge photoshoot at the end and I was interested in drag around the time and interested in makeup because I’m a gay boy, that’s what attracts us hair and makeup and clothes. So, at the time I was interested in making clothes and the makeup side of it and how to make a drag queen. We did a photoshoot, she did me up in drag and we were learning stuff about makeup and from then I felt so obsessed with drag and costume and I started to pursue costume and fashion and then.

What made you decide to enter Glow Up Ireland?

I am honestly obsessed with competition shows, like I love them. I love watching them. I love Project Runway, Drag Race, I watch Blown Away and this plant-arranging one on Netflix and I just watch them all the time because I find them so addictive. I was always like one day I’ll get on Drag Race but then Glow Up came out in the UK and obviously makeup I was obsessed, and then when I saw it coming to Ireland.

I was in the middle of quite a rut. I finished college when we went into the first lockdown so I finished makeup college into a world where we couldn’t be out in public, let alone two meters from each other. I was in a horrible rut where I was working in a bakery and I wasn’t doing anything I loved. So, I thought this was my chance, if I get on this this could actually change everything for me because it had been a year of trying to get jobs and nothing happening. I went for it because I felt like I would do well in a competition show and seemingly I did!

How did it feel to win the show?

There’s two moments to it now so it feels so much different now. So, when I won the first time it felt so surreal. Just before it I was like ‘maybe I will’, just as we were waiting to hear because we waited a lot longer than the show showed to find who won. I just felt so overwhelmed, so many emotions. It felt amazing, I felt like I’d finally achieved something huge after kind of picking away at things throughout my life. I finally just hit this peak that felt amazing.

I didn’t think it could feel any better than the moment I was told I won, but then the show aired and I was with my family and my friends and we were out. [Thursday night], that moment when they said it everybody in the bar cheered and were so excited and congratulating me, I don’t think there’s a feeling to describe how I felt it was so amazing.

What was it like working with the show’s host Maura Higgins and the judges?

Maura was great because she was so casual and down to earth and she didn’t have judgment for us. The judges were there to see if we were doing everything well but Maura was just casual, she’d come over in the middle of the challenge and count your eyeballs and take the piss and have the craic with you. Even when we were having the conversations after the challenges before the next challenge it would just be craic with Maura, they didn’t show as much as we chatted but we did have really nice time with her because she’s so causal and fun and she’s so down to earth.

The judges are amazing, even the guest judges are such wonderful nice people. Cathyanne Mac Allister is my icon now, I want to dress like her, I want to be her, I want to talk like he. I just love her, she’s so helpful and wonderful and Emma is the same. She’s so creative and fab and they know so much about the industry. Getting compliments from them and even feedback to build on really did help throughout the competition and really make you want to further your career.

What is your process behind creating a makeup look?

It kind of depends. For the show specifically I started to digitally draw face charts because it makes it so much faster to change things and blend things and get them out there because generally I’ll have ideas and they’ll sit in my mind for so long that by the time I ever get to doing it I’ll forget about it or something like that. Now, I just scribble it down and can change it as much as I want and create something brilliant.

Generally, I’ll see something and think ‘oh if I did that this way’ or ‘that car part has a cute move this way if I do that that could look cool on the face’. It’s a strange process that could have inspiration from anywhere but generally I just build it and hope for the best

What beauty products do you swear by?

I am obsessed with Kryolan. I use Kryolan TV paint for my drag foundation, they’re unbudgeable, they’ve coverage. People say full coverage about foundations Kryolan has coverage. Also, Kyrolan have cream pallets, they’re like grease paints and I used them so much on the show to build a colour base so then you can go on top of it a lot faster. I love Kryolan for base stuff, absolutely love their cream products.

Do you have a favourite look from the show?

I have a couple. One of my favourite looks is the frog sorcerer fairytale look I did. I just love how it turned out. I love the character design behind it because that’s what I have my degree in and what I love to do. I loved that because it really was getting to do what I loved.

The briefs, one of them that really stood out to me was the beauty in the eye of the beholder look. I loved the design that I did for it, I loved the emotion behind and everything I was trying to say with it. So that was one of my favourites, drawing those eyes on and really showing my love for the flaws that people have on their face that most people try to cover up. That did mean a lot to me to get that out there.

Do you have plans to start a makeup line?

I would love to. I just feel like seeing people like Keilidh [Cashell] and Aimee Connelly and people like that who’ve gone forward and made their own lines and they’ve become successful through that, it’s just so inspirational.

I’d love to do it. I’d love to make real grungy SFX, but affordable and achievable makeup. I would really love it. I’d love to just be that person that’s like ‘I’m going to make this into an eyeshadow pallet, for spring I’m going to do my garden flowers.’ I’d just love to be involved in that world. It seems like a lot of work though but I would love it.

What can we expect next from you? What’s on the bucket list?

I’ve started a full time job in Morphe in Arnotts. I’m on that counter makeup job route at the moment, so I’m hoping maybe I can move through Morphe and become a creative someone through there. I just want to try everything you know. The world felt cut off to me before this show and suddenly it’s opening up and I want to try editorial, I want to try runway.

I really would love to work in theatre and film, especially theatre. I love theatre makeup, I love the buzz of backstage in theatre. I want to do it all essentially, I want to be involved in that backstage buzz in fashion shows, editorials, theatre.

If you missed the Glow Up Ireland final, you can catch up on RTÉ Player.