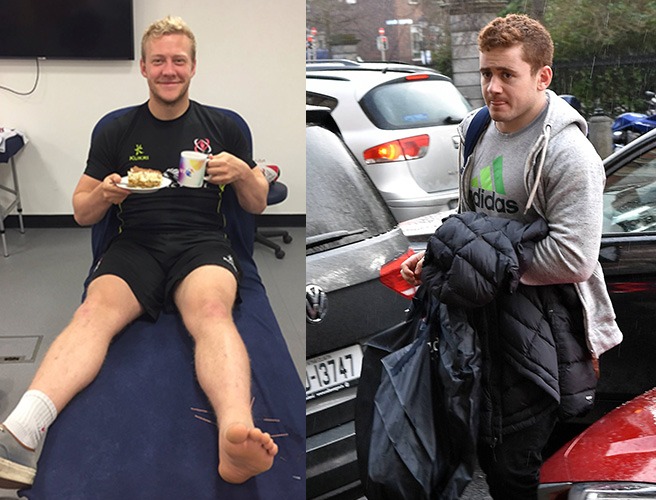 Rugby players, both current and former, have reacted in extremely different ways to the news that Paddy Jackson and Stuart Olding have been dropped by the IRFU and Ulster Rugby with immediate effect.

The trial received a huge amount of media coverage and caused a critical eye to be cast  over the rugby culture the players came from.

Since the news broke that neither of the players will be donning the Ulster or Irish jersey again, reactions from their colleagues, present and past, have been mixed.

Brian O’Driscoll told Newstalk’s Off The Ball that he felt the IRFU “were left with no option but to sever ties with Stuart and Paddy.”

“I think the IRFU moved swiftly to try and end this situation and to end the slur on the reputation of the game that has been in Ireland over the course of the last few months.

“In all negative situations, you have to try and draw some positives. Highlighting any potential misogynistic undercurrents that might exist within the game and stamp that out.”

Rob Herring read out a prepared statement on behalf of the Ulster team at a press conference, from which the media were barred, which expressed their sadness at losing their teammates.

“It is with a great deal of sadness that the players and pro staff have learnt of this outcome.”

“We know that the two boys will be successful both on and off the pitch wherever they go. As a group, we have to move on and our full focus is now on Glasgow this weekend.”

In a radio interview with RTÉ Paddy Wallace, a former Ulster and Irish rugby player, spoke out about how disappointed the fans feel having been left in the dark about the decision to drop the players but understood that it was a “no-brainer” from a monetary point of view as income for the organisation from sponsorship is far greater than what they receive from ticket sales.

“The decision itself was probably the decision that had to be made given the public pressure that was mounting and also the sponsorship issue… I have my own views on that but someone in Ulster Rugby has to come out and make that very clear… The vast majority in official Supporters Clubs are very disappointed.”

“I think that’s because they are fans of the game. They probably feel that these guys have been acquitted and they are being judged on their text messages which were obviously completely out of order and that is the core issue here… They have come out and apologised for their involvement and their actions and I think they need to be allowed rebuild their lives and start again.”

Shane Logan, the head of Ulster Rugby, strongly denied that pressure from sponsors was the driving factor behind the decision to revoke their contracts and didn’t see them playing for either team again in the future.

Speaking to the Irish Times he said, “No sponsor including Bank of Ireland drove the decision… the decision was based on alignment with what it is we stand for, in particular, the value of respect.”

“The players themselves admitted in their own statements that they were way short of what was expected of them… They have made a very serious mistake…I hope that they will learn from that and I hope they fulfil their potential going forward.”

Former Munster, Leinster and Ireland player Tony Ward spoke powerfully about his lack of sympathy for Jackson and Olding in a piece for the Independent which stated, “Given my passion for sport and the great game of rugby, I, as a human being and a male, have been appalled by what we have all been exposed to in the past few months. And, for the record, I despise the long-held populist image of the rugger bugger, beer-swilling days and all that they entailed.”

“My heart feels for the young girl central to the case, irrespective of the jury’s findings which I accept as final. I suspect that both players have been somewhat stunned at the extent of public reaction but I have little sympathy. I felt a real sense of arrogance emanating from the post-trial statement read out by Paddy Jackson’s legal team outside of the court house.”

“The best of times [relating to the Grand Slam] and worst of times for rugby but the right and proper decision by the IRFU.”

The verdict of the nine-week-long trial saw #IBelieveHer and #WeStandWithHer rallies erupt all over the country as the four men involved were acquitted of all charges when the jury did not find them guilty beyond reasonable doubt.

Paddy has since tried to reclaim his legal fees from the Public Prosecution Service and is set to receive a financial settlement from the IRFU.

As a result of the trial and other societal pressures, Ruth Coppinger’s Sex Education Bill (which includes consent lessons, something the trial highlighted that people do not know enough about) is not being opposed by the government so it will pass second stage of the Dáil.