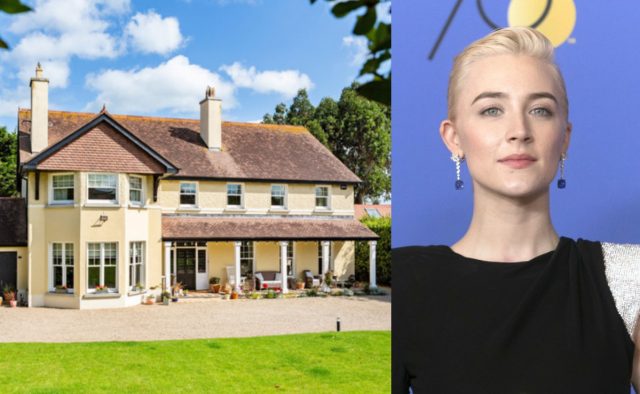 Saoirse Ronan has put her stunning five-bedroom home in Wicklow up for sale – and the asking price is a cool €1.5 million.

Pine Lodge, which boasts five bedrooms and five bathrooms, was listed on Daft.ie on Wednesday morning by Galvin Property and Finance.

The Irish actress’ decision to sell the home will come as a surprise, as she only purchased it in 2017 for €1.4 million.

The listing reads: “A property of this calibre and distinction is not often available in such a private setting and prestigious location.”

“A property of 450 sqm / 4,834 sq ft which was built in the 1970s has been re-designed and modernised in the past two years to produce a home of unparalleled quality in the area.”

“The layout and finish will impress even the most particular and comes to the market ready for the new owners to move in and invite your family and friends to oooh and ahhhhhhh.”

The property, located on New Road, boasts close access to the seaside – and it’s also based in the same area as Irish musician Hozier’s residence.

It’s believed Saoirse decided to sell her home in Ireland as she’s been spending a lot more time in the UK and the US.

Saoirse is currently dating Scottish actor Jack Lowden, who she starred alongside in ‘Mary, Queen of Scots’ last year.