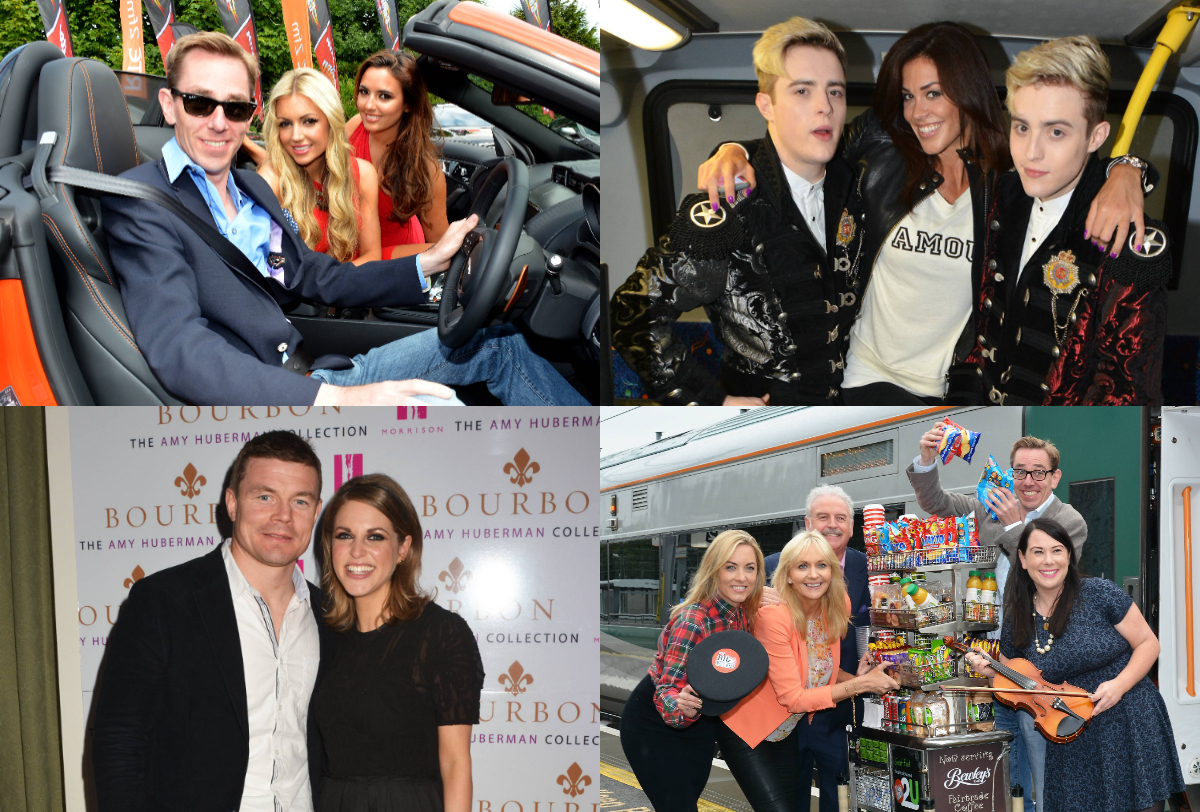 This Sunday’s episode of Reeling In The Years will focus on 2013.

The 30-minute programme will reflect on the horse meat scandal that spread across Europe, the Irish women’s rugby team winning the Grand Slam, and the moment Hozier released his debut single, Take Me To Church.

Inspired to take a trip down memory lane, we dipped into the celebrity archives from that year, and found some serious gems featuring our favourite Irish stars…

Ryan Tubridy was joined by models Rosanna Davison and Nadia Forde in May 2013 to launch the annual Cannonball event.

Pictured with Jennifer Maguire (now Zamparelli) on the grounds of RTÉ, the Irish stars posed on the bonnet of an orange Lamborghini.

Cannonball Ireland is the annual gathering of supercar enthusiasts who drive in convoy on an adventurous and picturesque road trip around Ireland, raising funds for charity.

Another gem from 2013 is this snap of Glenda Gilson, who was hosting Xposé at the time, posing with pop twins Jedward onboard a Dublin Bus.

The singers were launching the Olympia Theatre’s Christmas panto ‘Beauty & The Beast’.

The production also starred Linda Martin and Ryan Andrews, and was directed by Simon Delaney.

We couldn’t do this list without including a token snap of BOD and Amy.

This photo was taken at the launch of Amy’s SS13 collection of Bourbon shoes at The Morrison Hotel in Dublin.

The couple were enjoying life as new parents at the time, as they welcomed their first child Sadie just two months prior.

Aoife Walsh was crowned Miss Ireland at the Ballsbridge Hotel in July 2013.

The Tipperary native was photographed in her dazzling crown, as she posed next to runners up Emma Cronin and Kate Monahan.

This is perhaps the most random photo on this list, but also the best?

In July 2013, Shane Filan hosted an outdoor summer party for his fans at RTÉ in Donnybrook, to celebrate the release of his first solo single ‘Everything to Me’.

The Westlife star was joined by his manager Louis Walsh, who posed for some hilarious snaps with Shane and Ryan Tubridy inside an ice cream van.

Chris O’Dowd and Dawn O’Porter at the IFTAs

One of our favourite celebrity couples, Chris O’Dowd and Dawn O’Porter, attended the IFTAs back in 2013.

The ceremony was held at The Convention Centre in Dublin, and Chris picked up the award for Best Entertainment Programme for his Sky 1 series Moone Boy.

Since then, the couple have welcomed two kids – Art, 6, and Valentine, 3.

Saoirse Ronan at the IFTAs

Another gem from the 2013 IFTAs is this pap shot of Saoirse Ronan on the red carpet.

The Carlow native was just 19 at the time, and opted for a black Simone Rocha dress, which she paired with cream brogues, and crimped hair.

Andy Quirke joined a host of RTÉ stars at the station’s autumn launch in 2013, before the debut of his comedy series Damo & Ivor.

The actor arrived in character as Damo, and posed with a can of Dutch Gold as he took photos with the likes of Kathryn Thomas, Miriam O’Callaghan and Ryan Tubridy.

The series only lasted two seasons, but later inspired a movie – which was released in cinemas in 2018.

This photo has given us a MAJOR blast from the past!

Back in 2013, Celebrity Apprentice Ireland launched on TV3 (now Virgin Media), but it sadly only lasted one season.

The series saw a group of Irish celebrities compete for the chance to win €25,000 for their chosen charity.

Caroline Downey, the managing director of MCD, was the head judge alongside her two advisors – former politician Liz O’Donnell, and entrepreneur John McGuire.

Edele Lynch beat Amanda Brunker in the final, which aired on 28 October 2013.

After launching Cannonball in May, Ryan Tubridy kicked off the start of the annual event at Mondello Race Track in August 2013.

Following the roaring success of the sitcom, Brendan O’Carroll brought Mrs. Brown’s Boys to the big screen in 2014.

In this photo, Brendan was filming scenes on Moore Street in September 2013 with his wife Jennifer Gibney, and their now former co-star Rory Cowan.

In all honesty we have absolutely no idea what’s going on here, but we had to include it all the same.

The campaign involved a train travelling across the country for impromptu busking sessions, and at the launch, photographers snapped this hilarious shot of Ryan digging into the food and drinks trolley.

It would be a crime if we didn’t include a snap from the VIP Style Awards on this list.

Rosanna Davison looked gorgeous in this monochrome gown at the VIPs in 2013, where she picked up the award for Look of the Year.

Since then, the former Miss World has married her longterm love Wes Quirke, and welcomed three children – Sophia, 1, and twins Oscars and Hugo, five months.

Colin Farrell appeared on The Late Late Show back in October 2013 for a very entertaining interview with Ryan Tubridy.

The Irish actor revealed that he was offered millions to sell his infamous sex tape, and addressed rumours he was going to be the lead in Fifty Shades of Grey.

You can watch a clip of his interview below:

We couldn’t complete this list without including a snap from the Late Late Toy Show photocall in 2013.

The theme that year was Mary Poppins, and it was all kinds of epic.