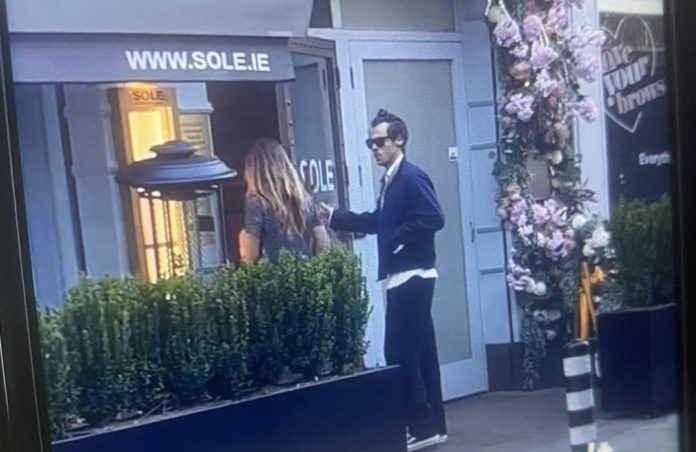 An onlooker has shut down claims Harry Styles was “rude” to a group of young fans who were following him on the streets of Dublin.

The singer is currently in the Irish capital for his sold-out gig at the Aviva Stadium on Wednesday, and has been spotted out-and-about with his girlfriend Olivia Wilde.

Earlier this week, a video emerged of the couple trying to keep a low profile as they walked down South William Street.

The short clip showed the pair walking away from a group of fans who had approached them, and one girl was seen hysterically crying after their interaction.

The video sparked speculation the former One Direction star was “rude” to the young girls, however an onlooker has insisted the singer was actually “very polite” to them.

The onlooker posted a longer video of Harry being approached by the fans on TikTok, and wrote in the comment section: “There seems to be a video going around that’s making it seem like he was rude to them [the fans]…”

“From what I saw he was very polite and pleading with them not to follow him and make a fuss,” they explained. “I wish I kept recording but I felt bad when I saw Olivia notice people noticing them.”

“After this they kept walking towards Grafton Street and he turned around to the girls once more and said ‘please’ and made a pleading gesture like this 🙏🏼.”

“They were just trying not to be noticed,” the onlooker added.

The fan attention hasn’t stopped the couple from enjoying their time in Dublin though, as the pair were spotted at the Vico Baths in Dalkey with Bono’s daughter Eve Hewson on Tuesday.

Harry and Olivia smiled at fans as they made their way to the popular swimming spot, where the 28-year-old went for a dip in the Irish sea.