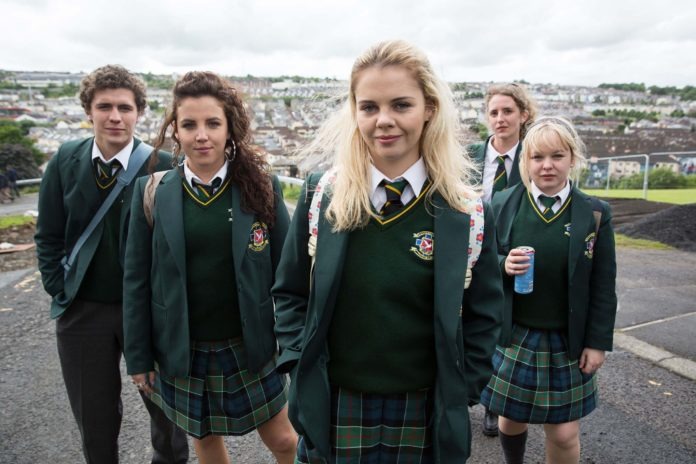 Nicola Coughlan has revealed who she would love to see make a cameo in the upcoming second series of Derry Girls.

The actress, who hails from Galway, told SPIN1038’s PlanB her wishlist of celebrities to make appearances in the hit show.

She told the presenter Rachael Ryan that while Channel 4 have “yet to confirm a date” for the second season to be released that cast will begin filming in October.

Nicola divulged her hopes for her character in this season revealing that she’d love a romantic interest on the show.

“I would really like Claire to develop a crush on someone in the new season because she wasn’t very interested in Father Peter in the first series, so I’d like her to have a crush!”

“The five us always have terrible ideas of what we would like to happen…but I think the dynamic of the five friends will stay the same.”

Discussing who she would love to see feature in the second series she said, “Ardal (O’Hanlon) would be amazing and he’s worked with Lisa McGee (the creator) before.”

“Imagine if he was a priest in it, in the vestments again, it would be great!”

“I went completely over the top and was like, I want Amy Poehler to play Claire’s Mum and they were like, you need to calm down!”

‪Ok, to celebrate Episode 3 of #DerryGirls I’ve decided to share with you the greatest picture of me that’s ever been taken.‬ ‪AKA: The Day I met a cute dog on set and it instantly went very wrong‬

Most recently the series was awarded Best Comedy Series at the Edinburgh TV Festival.