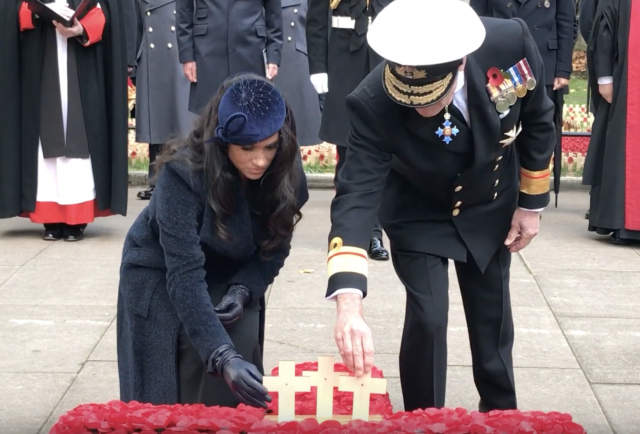 Meghan Markle stunned in a navy hat by Irish milliner Philip Treacy at the Field of Remembrance service at Westminster Abbey on Thursday.

Prince Harry has attended the service on his own over the past two years, but Meghan joined him at the service this year for the first time ever.

The Duchess of Sussex matched her Philip Treacy fascinator with a cosy navy coat, leather gloves, and knee-high boots by Victoria Beckham – which retail at £1,250.

Meghan Markle and Prince Harry attended the 91st Field of Remembrance at Westminster Abbey this morning to plant crosses in memory of all of those who lost their lives in action. ❤️ pic.twitter.com/JSXWpUJTgR

This also isn’t the first time Meghan has worn a hat made by Irish designer Philip Treacy, as she’s worn several of his designs before.

The couple took part in the service ahead of Remembrance Day on November 11 – which honours the sacrifice of those who fought in World War I.

The Field of Remembrance is a place where former service men and women, as well as members of the public, can plant a cross carrying a personal message in memory of those who have lost their lives in action.

This morning, Harry and Meghan placed their own crosses in the garden.

On Saturday, November 9, Meghan and Harry will join members of the Royal family, including the Queen, at the Royal Albert Hall to attend the annual Royal British Legion Festival of Remembrance.

Then on Sunday, November 10, known as Remembrance Sunday, the family will visit The Cenotaph, the war memorial in London, to pay their respects.