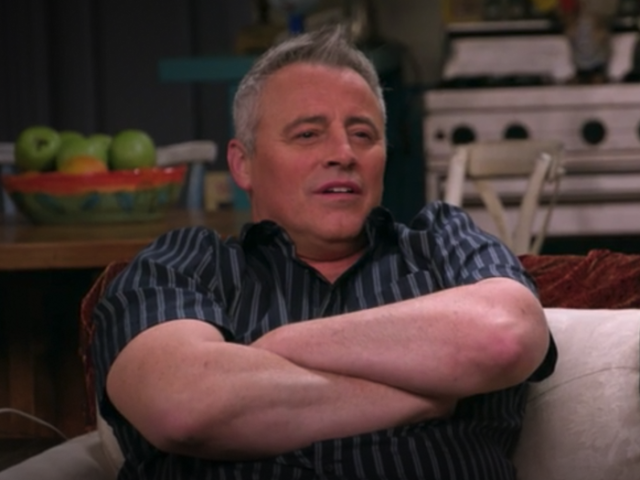 Matt LeBlanc “saw the funny side” of the Irish aul lad memes that went viral last month, according to his close friend.

After the Friends reunion aired, the actor became a viral sensation in Ireland, with many poking fun of his laidback pose during the HBO Max special.

Irish viewers compared him to to everyone’s “sound uncle” or the “fella you’d end up having a deep conversation with in the residents bar after a wedding”.

Matt LeBlanc sits like my da whenever he's forced to go to my auntie's gaff pic.twitter.com/rm4aXlUYPt

Matt’s friend and Episodes co-star Stephen Mangan appeared on the Ray D’Arcy Show on RTÉ Radio 1, where he was asked if Matt was aware of the memes.

Ray explained: “So, he was wearing this dad shirt [in Friends: The Reunion], he folded his arms and the funny people in Ireland just said, ‘Ah come on now, come on – he’s perfect. He’s your uncle there in the corner, going, ‘Oh right, down from Dublin, are ya? Dublin, is it?’ So, have you told him about them?”

Stephen replied: “Oh yeah. I mean, I wouldn’t miss a trick like that! It caused a lot of joy in this house, let me put it that way. I’m probably the perfect audience. Some of the stuff people were coming up with was absolutely priceless.”

“I’m not sure Matt really understood what was happening. But, obviously, he’s Italian, but he saw the funny side of it – he’s got a good sense of humour,” he added.

matt leblanc is your uncle when your parents forced your 6 year old self to stand up in front of the adults after a family dinner and sing a song you just learned in primary school pic.twitter.com/xjlwKDdArv

Stephen noted that Matt “came across as he is, which is very relaxed, very natural, very happy in his own skin”.

“So, that’s the man he is, and I think what you see is what you get. He’s no different from how you’d imagine to how he is in person.”

He said he had “a lot of fun” working with Matt on the sitcom Episodes, adding: “He’s that perfect combination – he takes the work seriously but he doesn’t take himself seriously. It’s the right way ’round – that’s the goal.”

Matt LeBlanc is Irish, I don’t want to see any other nation trying to claim him, he’s from Tullamore, he drinks milk with his dinner