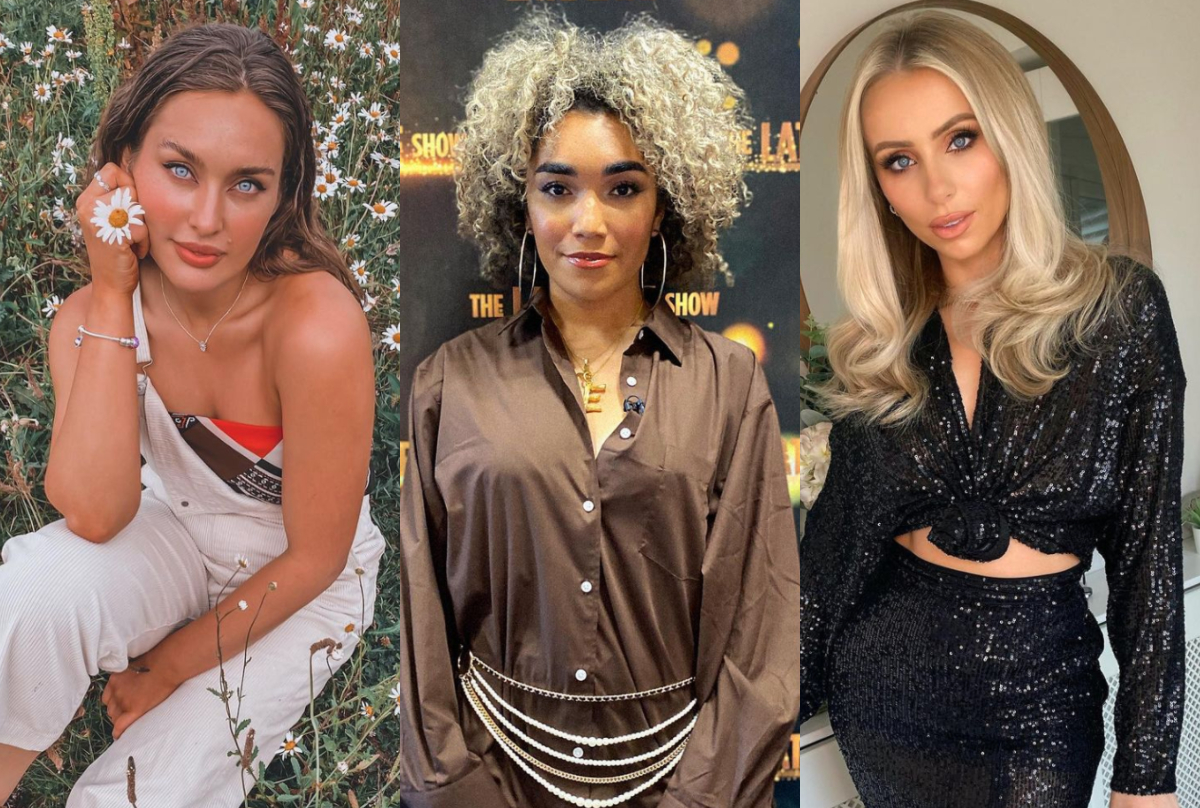 A host of Irish stars have encouraged their followers to sign a petition to make “image-based sexual abuse” a crime in Ireland.

The online petition, which was created earlier this year, started circulating on social media this week – after 140,000 intimate images, including many of Irish women, were shared online without their consent.

The files were first uncovered by Victims Alliance Ireland, which describes itself as “an organisation designed to give collective voice to anybody who has been victimised by another person or a system.”

The Discord server, where a lot of the images were being shared, has since been taken down.

We have unprecedented situation where we have become aware of a massive issue around image based crime. We have seen massive folders with thousands of images that have been taken and shared without consent of the person in the image. The scale of the problem is in tens of 1000s

It’s understood the images were taken from various platforms – including Whatsapp, Only Fans, Tinder, and Instagram.

Some of the photos were taken without the women’s knowledge or consent, and the server also included images of underage girls.

A host of well-known faces have since encouraged their followers to sign a petition, which has almost reached 50,000 signatures, encouraging the Irish government to bring forward legislation that will make this type of abuse a crime in Ireland.

Please take a few moments to sign this https://t.co/iXKl5Jlrnc

Roz Purcell shared the petition on her Instagram Story, and said: “To any girls affected that might be reading this – I hope you’re ok.”

“Now any lads reading this – if your group chats start to share these nudes thinking it’s only a bit of fun I recommend you think about the girls and women in your life like your mum, sisters, friends, girlfriend and imagine if that was them.”

“Don’t share them. Have respect. Call out your mates don’t just say nothing. There’s been a bill passed but has not gone into legislation yet – let’s try hurry it the f*** up.” 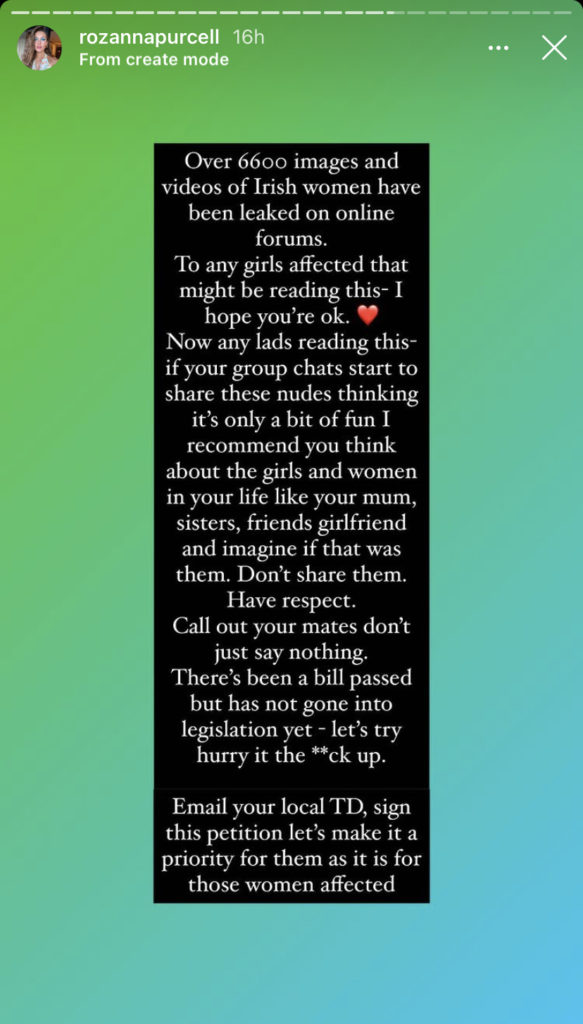 “Email your local TD, sign this petition let’s make it a priority for them as it is for those women affected,” she added.

Influencers Rosie Connolly and Niamh Cullen also shared the petition on their Instagram Stories, and encouraged others to sign it. 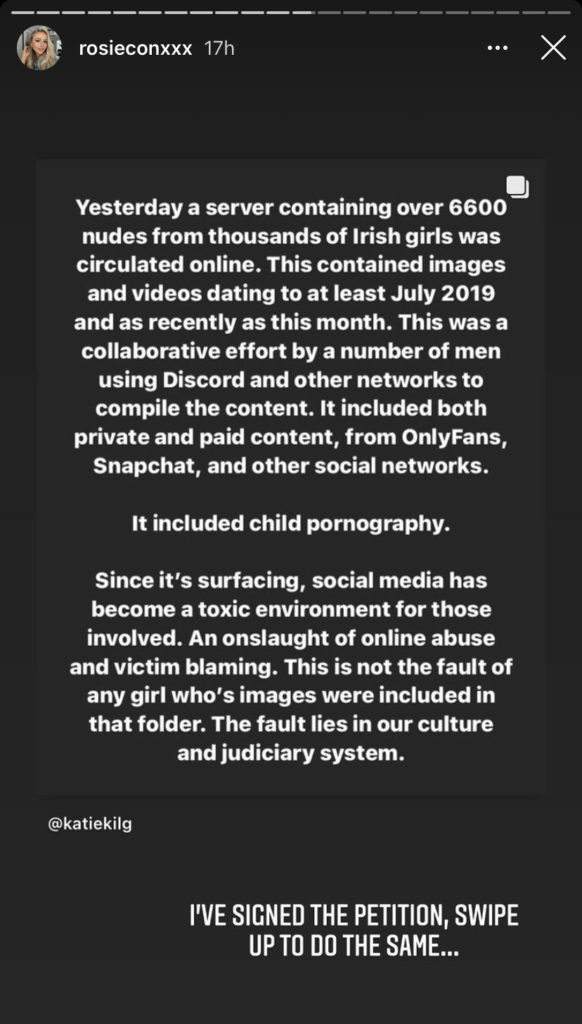 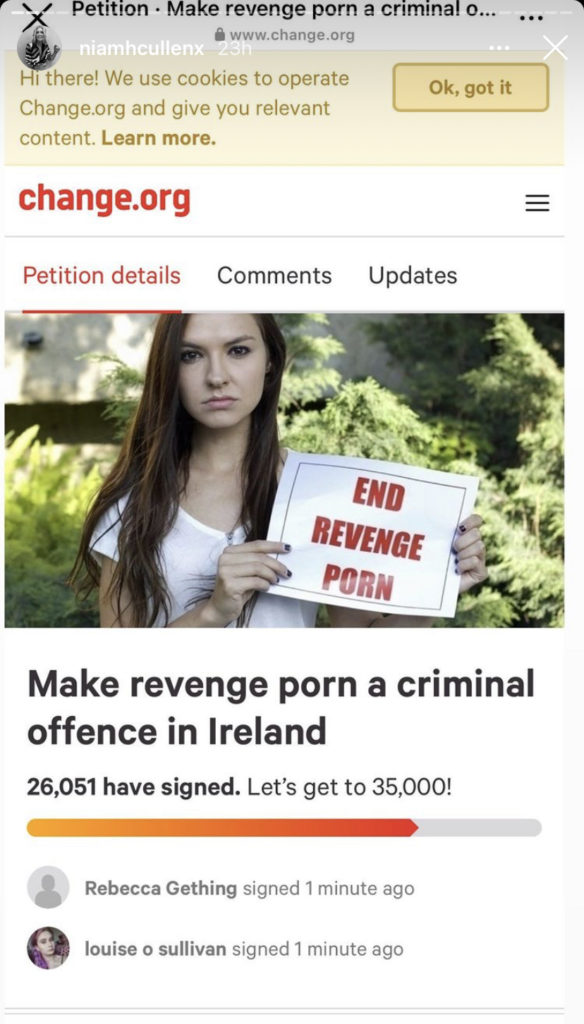 “This is a disgusting case of injustice. We need change & we need to protect our womxn. please sign the petition & use your platform to support these womxn.”

This also included pictures of minors!!
Sign the petition.
(Slides from @katiekilg on IG)https://t.co/uANgJCVWbh pic.twitter.com/eB5bUBrvs8

The Harassment, Harmful Communications and Related Offences Bill will be brought before the Justice Committee on December 1st.

After the Bill is debated in the Dáil, it will go before the Seanad. If the legislation is passed, offenders could face up to seven years in prison.

A number of politicians raised the issue in the Dáil on November 19, including Sinn Féin leader Mary Lou McDonald, who said: “This is a profound violation of women and girls’ rights and demonstrates again the inadequacy of Irish law in protecting them against such abuse.”

TD Holly Cairns also delivered a passionate speech in the Dáil, and called on the Minister for Justice to act now to protect victims.

The sharing of thousands of images of Irish women & girls on online forums without their knowledge is a profound violation of women and girls’ rights. https://t.co/NzZj4KwNRQ

Thousands of images and videos, mainly of Irish women, and including underage girls, are being maliciously shared without consent on online forums and in private messaging groups.

I am calling on the Minister for Justice to act now to protect victims. pic.twitter.com/uVyfqeU53s