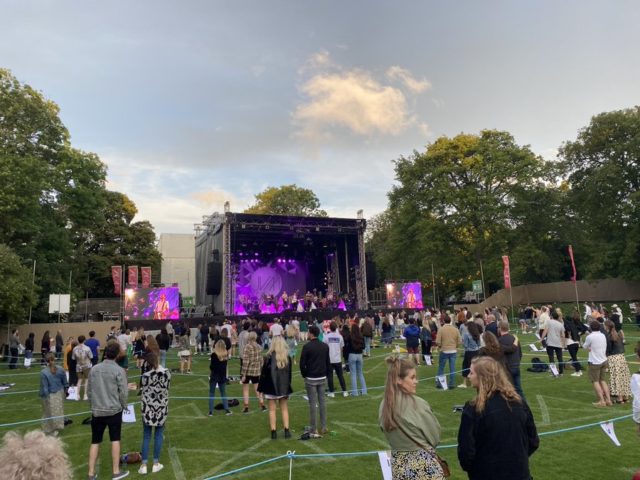 The concert was the first of a number of pilot gigs announced by Arts Minister Catherine Martin, to help bring back live performances in Ireland.

The show kicked off on Thursday at 7pm with opening act Sorcha Richardson, and it was also live-streamed on YouTube for fans who missed out on tickets.

Great show tonight, thanks to everyone who made it such a safe summer celebration 🎉🙏

James channelled everyone’s emotions on the night, when he said: “I didn’t realise how much I needed this until it gets taken away…”

The 500 people who attended the gig were split up into separate “pods”, which were evenly spaced out from each other.

Guests had to wear masks at all times unless they were in their “pod”, and the event had a strict “no alcohol allowed” policy.

Attendees were banned from bringing any furniture like camping chairs, and were asked to obey social distancing rules and to keep sanitising their hands.

Although it was certainly a different concert experience, attendees thoroughly enjoyed the event, and took to Twitter to praise how well it was organised.

I’m actually in disbelief that I was at a gig. It was emotional. @jamesvmcmorrow and @SorchaRichardsn were both brilliant. Here’s hoping for many more to come. #jamesvincentmcmorrow #Iveaghgardens #livemusic pic.twitter.com/IUJbLw3G9R

Feels special to be at a real gig again. Looks very different to what Iveagh Gardens gigs used to be like, but it’s one hell of a step in the right direction. James Vincent McMorrow judging the mood beautifully so far… pic.twitter.com/ghbxV3VNVU

The first of many safe & well run live gigs to come! pic.twitter.com/tGmFUGwqtW

Privilege to be at #Iveaghgardens to hear live music again. Fantastic performances by @jamesvmcmorrow & @SorchaRichardsn .

Event well run. We need to move beyond pilot gigs and get the arts back up and running.

Fabliss evening #iveaghgardens thanks @jamesvimcmorrow for an emotional return to live music. Excellent trial run, fair play to all involved in getting this up and running. pic.twitter.com/lkwGfC45mf