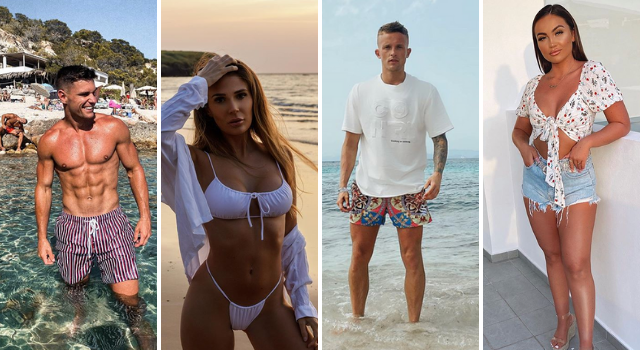 Popular couple Ellie Kelly and Conor Ryan are among several Irish influencers who jetted to Ibiza this week for a sun holiday – despite strict government guidelines.

The pair are not the only ones on the popular island, with Irish influencers Rob Lipsett and Sarah Godfrey also separately holidaying there with friends.

When contacted for comment Conor told Goss.ie that both he and Ellie would “definitely be quarantining” when they returned home, confirming they will both be following proper protocol when they are back in Ireland.

“Of course we will be isolating for two weeks, probably longer,” he said.

Rob Lipsett had also told followers he would quarantine on return to the UK.

Currently the Irish government are urging people to only leave the country for “essential travel”.

They also released a green list of countries to travel to, if you are going to travel, which includes Monaco, Italy, Malta, Finland and Norway. But Ibiza is not on the list.

If anyone is to travel outside of the listed countries, they must self-quarantine for two weeks on return.

Since landing on the island, the couple have shared photos in the sun, as well as partying at night, and hanging out with friends during the day.

Although Ellie, 24, didn’t tag the location in her latest Instagram posts, she replied to a friend in the comments section confirming that she was in Ibiza since Wednesday.

Meanwhile Conor has been posting more photos and videos from the sunny spot, including posing alongside Irish influencer Rob Lipsett, and Love Island star Chris Hughes.

“Bronzed with the man himself isn’t it..,” he captioned a photo alongside fitness influencer Rob.

While Rob currently lives in London, UK residents have also been advised they must isolate for two weeks after returning from Ibiza, as it is not on their green list of countries to travel to either.

In another photo, Dubliner Conor shared a picture with Love Island star Chris Hughes, writing: “Well that was a mad dinner anyways.”

The pair posed side by side at popular venue STK.

The Dubliner shared videos on her Instagram stories enjoying dinner and drinks with pals, also in STK this weekend.

Currently in Ireland over 70% of all coronavirus cases are with people under the age of 45, with many campaigns focusing on younger people staying apart in order to flatten the curve.

It comes after Brian Dowling’s husband Arthur confirmed he had taken two COVID tests, amid a trip to Germany last week.

Responding to a comment on Goss.ie’s Instagram post, Ellie assured followers that proper safety measures were put in place and confirmed again that they will both be self-isolating on return.

“Iv posted numerous times in the up coming months that I was planning on traveling so the fact your insinuating I was trying to hide is a bit mad,” she replied to a user.

“We traveled from Belfast because we were staying with friends before hand & traveling from there. We had this booked months & where have I once told anyone this is safe to travel ? No where.”

“We had it booked months & was either going to loose a massive amount of money so we took the PERSONAL risk as we are lucky enough to work from home & quarantine safely when returning home for 14 days.

“Flights were still going, nothing was cancelled, & measures were put in place to be able to do it safely so again we took the PERSONAL decision to come.

“I am not advising or “Influencing” anybody to travel by posting pictures that is not my intention. But thank you,” she added.