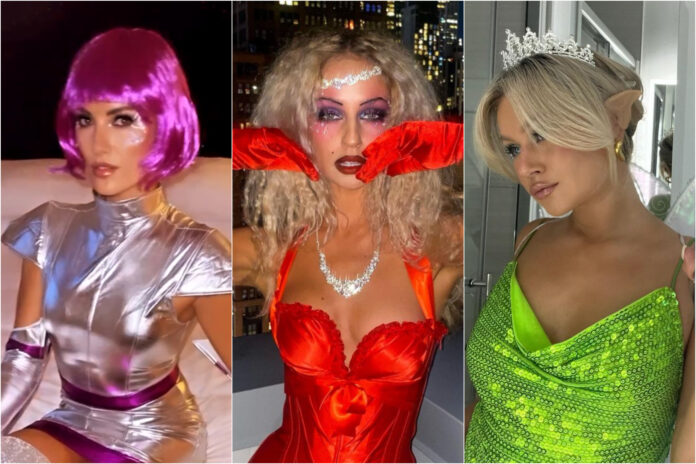 Although Halloween isn’t until Monday, that hasn’t stopped people from dressing up and getting into the spooky season spirit over the past few days.

We have rounded up some of our favourite costumes from Irish stars so far.

Holly Carpenter dressed up as a galactic glambot for her Halloween party on Saturday night.

The Irish model wore a short purple wig along with a metallic silver dress, gloves and knee-high boots.

Her boyfriend Jamie dressed up as an alien, and Holly captioned her Instagram post: “Hands off my man alien biiiiiiitch.”

The Irish model, who recently moved to New York after signing a major deal, wore a red corset with matching gloves and a mini black skirt for the occasion.

She completed the look by crimping her blonde locks, and wearing a bold red lip with dramatic eye makeup.

As we stated earlier, James Kavanagh won Halloween 2022 with his Chanel Marge costume.

The Irish influencer wore a pink suit by Eamonn McGill, a blue Marge-style wig, and painted his entire body yellow to achieve the look.

@sophie_murraayy tinker bell costume 🧚🏼🫶🏼✨ what are you dressing up as this weekend? 🧚🏼 #halloweencostume #halloweenoutfit ♬ Made You Look – Meghan Trainor

The blonde beauty dressed up as Tinkerbell, donning a sequined green dress, fairy wings, pixie ears and sweeping her blonde hair back into a claw clip.

Lauren Whelan and Keilidh Cashell teamed up for their Halloween costume this year.

@damihopeHi, I’m Dami, your friend till the end (the knife is a prop – FAKE KNIFE) 🫣♬ original sound – ness

Dami Hope turned up the style stakes at the Kiss Haunted Halloween party on Friday night dressed as Chucky.

The Love Island 2022 star, who dyed his hair red for the look, was joined by his girlfriend Indiyah Polack at the event.

Indiyah dressed up as Chucky’s Bride, and the couple looked amazing!

She looked out of this world!

The Love Island 2019 star stunned in a black dress, black wings and black horns; and used prosthetics to enhance her cheekbones for the ultimate snatched look.