Gay Byrne’s daughter Crona has responded to the controversy surrounding a tweet that was posted by Mr. Tayto about her father’s death.

After the news of Gay’s death broke this week, the crisp company tweeted a picture of a sad looking Mr. Tayto, alongside the words: “It’s a sad day for the Nation. Rest in peace Gay.”

The post sparked serious backlash on social media, and Tayto were forced to delete the post after some branded it “distasteful”.

Despite the backlash, the broadcaster’s daughter has revealed she had no issue with the post.

Former RTÉ presenter Gareth O’Callaghan defended the tweet in a lengthy post on Facebook, and Crona commented: “Gareth, well said as always. I certainly don’t have an issue with the post from Mr Tayto and I certainly don’t think that dad would have either!!”

In Gareth’s post, he said: “This is an image from Twitter that has caused a storm today. Or is that just a storm in a teacup? Take a look at it. It’s the character Mr. Tayto looking very sad. His little short message says it all. I personally thought it was so poignant and cute in a harmless heartfelt way.”

“Instead, as a result of a ‘deluge of public revulsion at the insensitivity of the creators of this cartoon…blablabla…’, Tayto felt obliged to remove the tweet, which ironically is now going viral – thanks to all those do-gooders and politically correct types who appear to have very little do with their time except object to something that I know Gay Byrne would most likely have loved and laughed at in equal measures.”

“The people who objected to this clever and endearing little piece of animation genius clearly need to cop on, and understand that life is too short for their chronically constipated, rose-tinted view of what they believe the rest of us should all be thinking,” he continued. 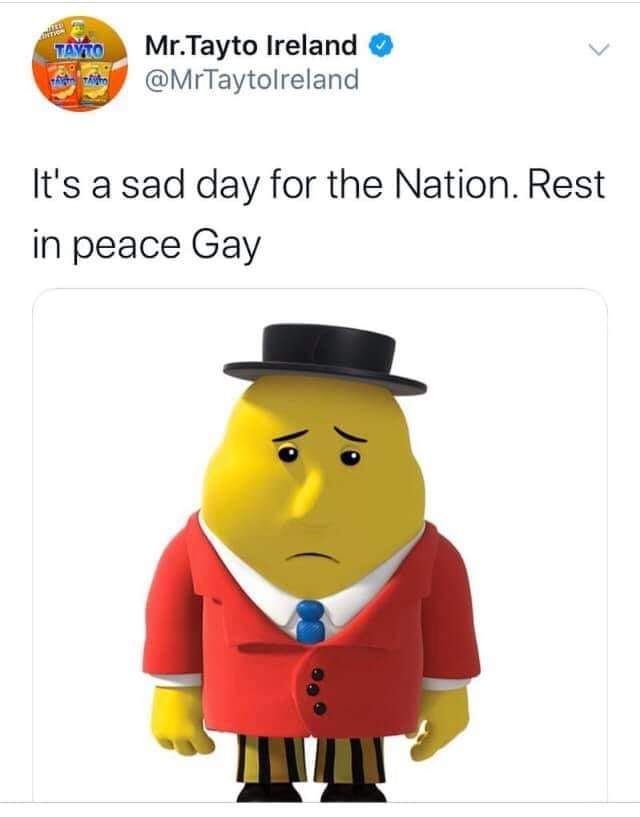 “Most of these contributors I’ve been reading probably don’t even know how abstract and how outside-the-box Gay Byrne actually was down through the years in his thinking – in terms of trying to do things differently; and his tireless efforts to shock the establishment and shake them out of their neanderthal ‘safe’ culture.”

“A suggestion from someone who knew him: Learn from the best instead of lamely following the rest. Be unique and study what is different and so important about creating your own opinions and beliefs. Stand out. Think differently. Reflect instead of react.

“Mr. Tayto might not be a real person to many. But his sentiments in this caption are, and they express the same sad feelings that so many real people feel this evening; and maybe that’s the point of the cartoon. Animation is just a more adaptable version of reality. Think of The Simpsons.”

“Sometimes it helps to see the sadness of life, and in turn the reality of life’s truths, through the eyes of an animated cartoon character that so many children love and can relate to, in order to make sense of what lies ahead of us all; and, in doing so, to make the confusion of all that stretches out before us that little bit easier to deal with.”

“Instead, sadly, the PC opportunists seized the chance here to jump on board and abjectly denounce something that many of us feel is both poignant and harmless,” Gareth wrote.

“The normal smiling face of a well-known cartoon character we see here is looking unexpectedly confused tonight, and sad and lonely Or maybe it’s in keeping with the real human grief that comes from the struggle of letting go of someone who many people thought they knew, but it’s only now that they’re finally starting to get to know. After all, the world is so much quieter and more vulnerable without them around.

“I know for sure that Gay would be having such a laugh today at the debate that has broken out over the comments of a cheese and onion crisp. Makes me want to laugh and cry,” he added.