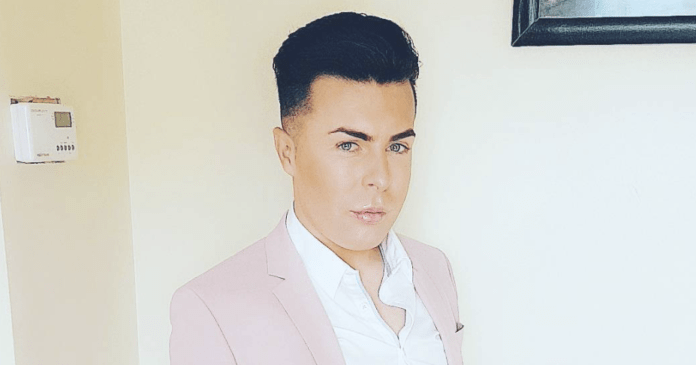 Alan McGarry hit our screens on Sunday Night when he went on TV3’s Blind Date looking for love.

The Ballyfermot native is no stranger to TV, after appearing on TLC Russia and Polish TV for show Body Fixers, and he’s had appearances on TOWIE.

Speaking exclusively to Goss.ie, Alan said, “I decided to go on Blind Date IRL because I’ve been single all my life. I’m 28 years old and I’ve never been in love.

“I was very anxious about applying. Lots of things were going through my head, such as am I going to know these guys, will they like me or just general paranoia.”

“I was the suitor so I had a choice to choose from 3 lovely guys, but you know absolutely nothing about them it’s all hushhush back stage.”

“I was a nervous wreck I had no nails left before I went on set. I didn’t even think about choosing the wrong person I just thought about what if they don’t like me.”

Speaking about his ideal man, Alan admitted that he may have his eye on the show’s host Al Porter.

“Al is a good looking man I think. I think it’s his personality, intelligence and his warmth friendless that makes me say oh he’s a cutie!”

“It’s very hard to say what ideal man I’m looking for because I literally have no type but then again I don’t go looking. I don’t like the party scene or looking for a man at a bar.”

“I think I’m looking for someone who is accepting, open minded and that has aspirations I think that’s lovely!”

Alan also admitted that he constantly gets mistaken for the Irish comedian.

“I love Al Porter. You’ve no idea about how many times a day I’m told I look like him I honestly don’t see it all.”

“It could be our names or that we both have black hair but I can’t even go on Tinder without being asked Al why are you on Tinder?”

“I honestly don’t mind I’ve no complaints there because he’s lovely talented man.”

During our interview with Alan, he also opened up about being bullied in school when he was younger, and how it’s affected his confidence.

“I grew up as a ginger kid who literally was bullied for the colour of my hair and it was horrible, especially being in school and being picked on every single day. If it wasn’t that, it was my sexuality.”

“I grew up hanging around with other gay guys who put me down it was horrible they would just say Alan you’re fat, you’re ugly.. no one likes you.”

“I’m still very conscious of how I look and especially when I’m going on television – I have to make sure I’m looking really good.”

“I’ve been getting anti wrinkle treatments and lip fillers for a few years now and that’s me feel better in myself.”

“I know not everyone agrees to these procedures but if something makes you feel better in yourself you should go and grab it. I’m only enhancing the beauty inside me.”

The 28-year-old dreams of being a TV presenter, however, he currently has his sights set on more reality TV – namely Big Brother.

“Big Brother is where it’s at. I’m getting into that house whether they like me or not, they haven’t even had a real irish contestent yet!

“I was so close to getting on in 2014. I know I’ll be working on television it’s where my heart bounces. You need to believe it and achieve it and that’s what I’m doing.”

Check out all of today’s top stories on the Daily Goss!