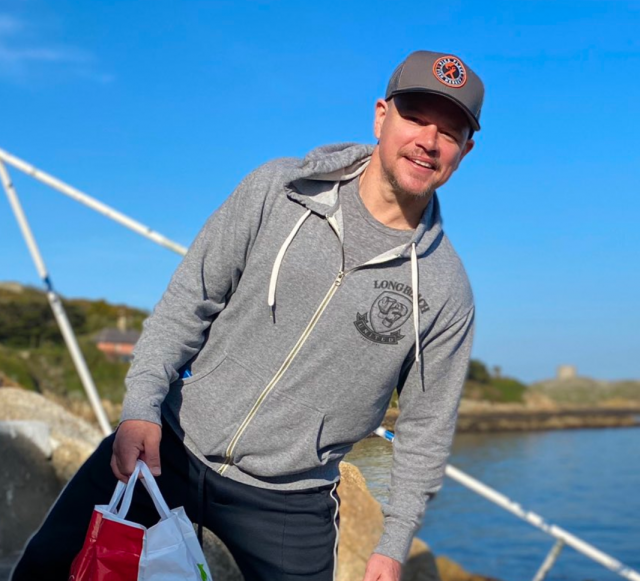 Siobhan Berry, the Dublin mum who took that photo of Matt Damon, has admitted she “felt awful” after the snap went viral on social media.

Siobhan was at the Vico in Dublin with her family when she bumped into Matt, who was going swimming with his kids.

The Hollywood actor kindly agreed to get in a photo with her two daughters (holding his now famous SuperValu bag!), and at the time Siobhan and her husband agreed that they wouldn’t share the photo publicly.

However, the photo ended up getting leaked through a family WhatsApp group a few days later, and it quickly went viral on social media.

The day we met #MattDamon

You may have seen this photo doing the rounds of late. As confirmed on radio he is holding a bag of towels not cans and we can confer! #Mattonspin @SuperValuIRL pic.twitter.com/AjRpJFzpYs

Thankfully Matt saw the funny side of the photo going viral, as he revealed what was in his SuperValu bag during an interview on Spin 1038 this week.

After Matt spoke out about the photo, Siobhan revealed the story behind the now-famous photo.

“You may have seen this photo doing the rounds of late. Initially, we had no intention of sharing the photo but now that Matt’s been laughing and talking on the radio about it, I thought I’d tell you how I came to take this photo,” she wrote on Twitter.

“We were out for a family swim and we bumped into Matt and his family. It was all very cool – no one else around… just his (and my family) enjoying the freezing cold water and having a laugh!”

“As we were all leaving, he very politely obliged for a photo, leaning in with his @supervalu bag keeping the social distance! As he confirmed on the radio, he was holding a bag of wet swim gear and towels – not cans!!”

“Both my husband and I agreed not to share the photo publicly but it got leaked through a family WhatsApp group a few days later and boom! It was then all over social media,” Siobhan continued.

“We felt awful and really sorry about the whole situation; we wrote an apology letter to him but never got to deliver it.”

“After hearing him on radio today, he obviously sees the funny side and the fact that the photo ultimately turned into one of the feelgood stories of the early summer.”

“While we never intended that the photo should leak anywhere, we were delighted that so many people – Matt included – got so much entertainment from the result. And the result?”

“Irish people were delighted to welcome such a friendly and globally respected actor and activist to live amongst us while enjoying his privacy and one of the few good things that the virus has thrown up – precious and hassle-free time with his family in a country that respects and cherishes the important things in life.”

Siobhan added: “Also, our daughters (aged 9 and 11) learnt a very valuable lesson. They now see how something private can so quickly go viral and spin out of control!”