She and Martin Guilfoyle will be hosting the The Zoo Crew from this Monday onwards.

The hilarious radio personality has been working as an entertainment reporter on Spin for the past year, but is now moving onto bigger and better things.

Doireann previously worked for 2FM before moving to SPIN, and this year she blew up on social media thanks to her hilarious impressions of bloggers and influencers on her Snapchat.

Check out our latest episode of The Daily Goss right now: 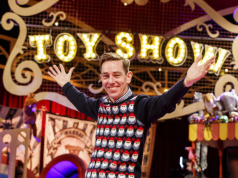