Disney are looking for local dancers for an upcoming film which will be shot in Ireland.

Walt Disney Studios sent out a casting call for a musical which is set to begin production during the summer, with the rehearsals due to begin in mid-March.

The world-famous studios said that they are looking for “technically trained dancers for an upcoming musical feature film to be shot in Ireland”.

“Seeking dancers to play characters ranging from 18 years to 60 years – all ethnicities, shapes and sizes are welcome,” the casting call added.

The studio has also specified that “strong tap skills” are a plus along with “elements of ballet, waltz, and jazz”, and that “dancers will be hired locally from Ireland.” 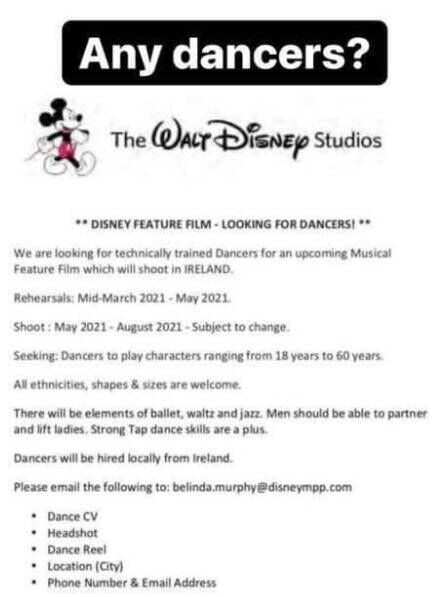 The Disney studios have not yet announced which film is coming to the island, but speculation has already begun.

Earlier this month, Patrick Dempsey confirmed that he and Amy Adams would be reprising their roles from the 2007 film ‘Enchanted’ for a sequel entitled ‘Disenchanted’, which according to Production Weekly will be filmed in Ireland.

The beloved rom-com saw Amy star as Princess Giselle, banished from the animated land of Andalasia to the live-action world of New York.

The casting for the upcoming film is being run by renowned Irish movie and theatre choreographer Belinda Murphy.

To apply for the upcoming film, email your contact details, dance CV and reel and location to [email protected]

Meghan Markle’s former colleague speaks out to defend her – amid...