Cillian Murphy has opened up about the possibility of a Peaky Blinders feature film.

Fans of the TV drama have been calling on show bosses to make a movie of the much-loved series.

Speaking about the prospect, Cillian said it would be a “sexy idea”.

Silver screen: Cillian has opened up about a possible Peaky Blinders movie | BBC

“It’s kind of a sexy idea, but I’ll reserve judgement until the idea is presented to me,” he said.

Despite series three going down a treat with viewers, the TV star expressed doubts about how a film version would work.

“I love the idea sort of theoretically, but it has to come at the right time, you know?”

BBC: Cillian admitted he worries if the show would translate well from TV to film | VIPIRELAND.COM

Speaking to Express.co.uk, the Cork native admitted he would be worried how the BBC hit would transfer to the big screen.

“You can’t alienate the beautiful democratic thing of television where everyone just watches it,” he added. 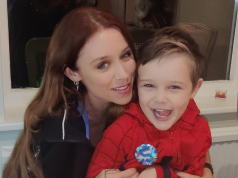