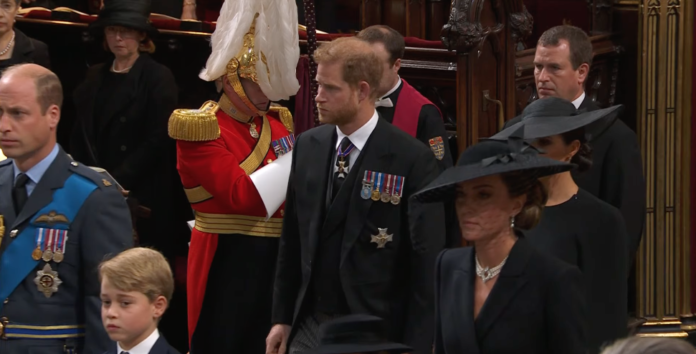 Prince Harry was “banned” from wearing his military uniform to the Queen’s funeral today.

Last week, Buckingham Palace confirmed only senior working members of the family would be allowed to wear their military uniforms to events honouring Queen Elizabeth II.

The rule meant Prince Harry and Prince Andrew would have to wear morning suits for all events surrounding the Queen’s death, despite the fact that they’re both veterans.

King Charles, walks to to Westminster Abbey alongside Anne, Princess Royal, William, Prince of Wales and Prince Harry, Duke of Sussex, on the day of the state funeral and burial of Britain’s Queen Elizabeth #queensfuneral 📸@Reuters pic.twitter.com/C4pl8ZTdi8

While Harry was completely banned from wearing his uniform, the Palace said Prince Andrew would be allowed wear his uniform at a final vigil for the Queen “as a special mark of respect.”

The decision sparked uproar on social media, as Harry served in the army for 10 years, and completed two tours in Afghanistan.

Days after the “ban” hit headlines, the Palace announced that the Duke of Sussex would be allowed wear his military uniform during a special vigil for his late grandmother on Saturday.

On Saturday evening, Harry joined his brother Prince William and six of the Queen’s other grandchildren at Westminster Hall to stand in silence for 15 minutes by her coffin.

According to royal correspondent Omid Scobie, King Charles “requested” both his sons to be in uniform at the vigil.

In another tweet, Scobie claimed the Palace “caved to public sentiment after thousands complained about the decision to ban him and not Prince Andrew.”

While Harry was allowed wear his uniform for the vigil, he was forced to wear a morning suit to her state funeral on Monday, September 19.

Harry and his wife Meghan Markle stepped down as senior working royals in March 2020, before moving to the US.

Meanwhile, the Queen’s son Prince Andrew was forced to step down from public duties in 2019 because of his connections to a convicted U.S. sex offender, the late Jeffrey Epstein.