Netflix has issued a casting call for an actor to play Prince Harry in the upcoming sixth season of The Crown.

The streaming giant are looking for someone aged 16-20 who has a strong physical resemblance to the Duke of Sussex.

No professional acting experience is necessary, and applicants are being told to email a short video of themselves talking about something they love as part of the audition process.

The job advert reads: “Robert Sterne, Casting Director of the Netflix series THE CROWN, is searching for an exceptional young actor to play PRINCE HARRY in the next series.”

“It is a significant role in this award-winning drama and we are looking for a strong physical resemblance. Please see photographs for reference. Shooting will commence November 2022 in the UK.”

“No previous professional acting experience required. We are very experienced in providing a great deal of support for the young actors and their families through what they find is a uniquely creative process.”

The deadline for the applications is October 14 at 6pm. 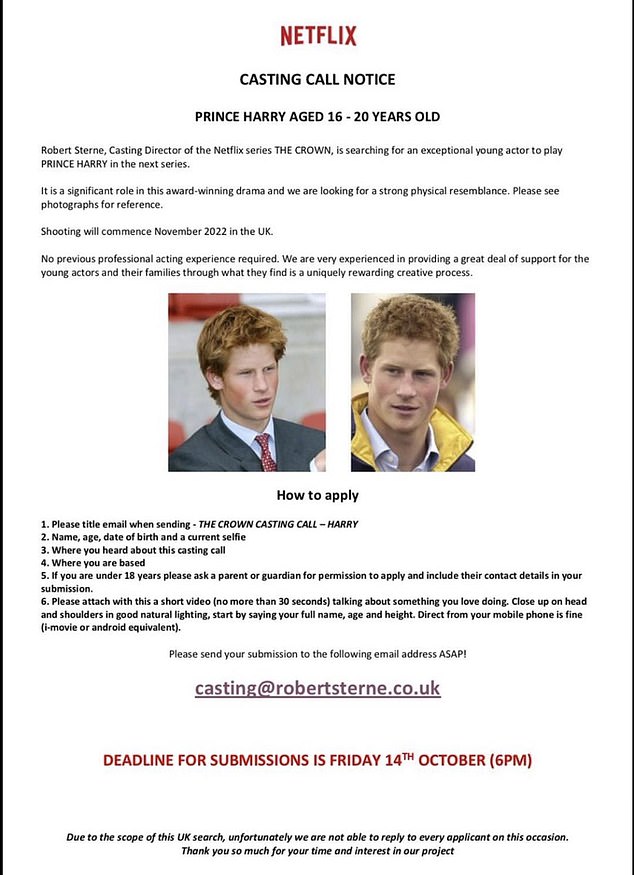 Last month, Netflix announced that Rufus Kampa will play Prince William from the age of 15 in the next series of The Crown, while Ed McVey will play him during his late teenage years into his 20s.

Rufus and Meg were both discovered from self-submitted audition tapes following a casting call on social media.

Season five of The Crown will premiere on Netflix on November 9.