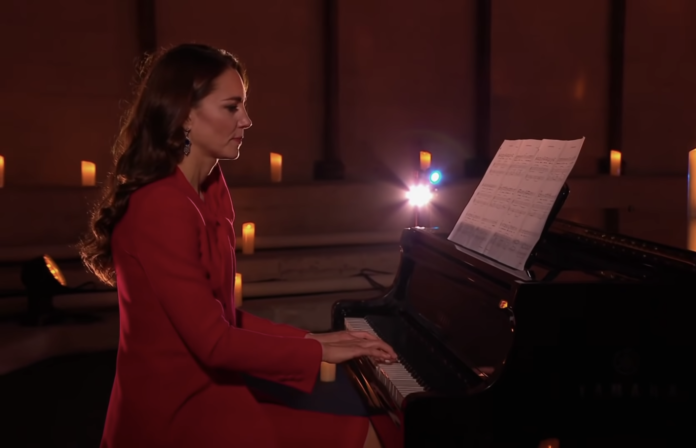 Is there anything Kate Middleton can’t do?

The Duchess of Cambridge had royal fans asking the very same question on Christmas Eve, as she performed alongside Tom Walker during a special carol service.

Earlier this month, Kate hosted a Christmas concert in Westminster Abbey, to thank the people who have supported their communities during the coronavirus pandemic.

The concert aired on ITV on Christmas Eve, and during the musical event Kate played the piano for Tom Walker, as he performed his Christmas single ‘For Those Who Can’t Be Here’.

Speaking about performing alongside the Duchess of Cambridge, Tom said: “It was very secret, very secret – even the studio didn’t know what was going on. We were sitting on opposite sides of the room for COVID, rehearsing.”

“So we got together, we rehearsed the song like nine times and by the end of it she’d absolutely nailed it, and then she went away for a couple of days and practised it, and then we finally got to do the recording of it.”

Kate Middleton on piano. Who knew. And Tom Walker.

“For Those That Can’t Be Here” ♥️ pic.twitter.com/ZtCJbKgujZ

“And I was really impressed because it’s one thing playing along with me in a studio, just the two of us, but then to jump straight in to playing with a live string quartet and a pianist and two backing singers, all of which she’d never met before, and then doing live takes in front of the camera – that’s a whole other jump from jamming.”

“She absolutely nailed it and I was so surprised at how great she was at keeping time, because she had to start the song off and lead it,” he added.

It’s safe to say viewers were very impressed by Kate’s piano skills, and took to Twitter to praise the mother-of-three.

As if we couldn’t love Kate Middleton any more! She played the piano beautifully.

kate middleton playing the piano actually has warmed my heart, she is beautiful, she is an icon, and she will forever be my favourite royal!! #TogetherAtChristmas

The Duke of Cambridge, British Paralympian and junior doctor Kim Daybell, actor Tom Felton and presenter Kate Garraway all gave readings at the service, and there was also a performance of To The Day – a special piece created for the event by poet and writer Lemn Sissay.