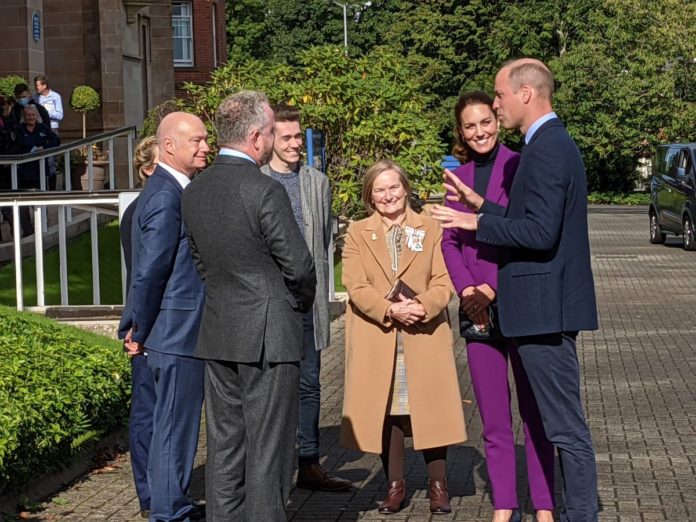 Kate Middleton stunned in a bold purple suit during her and Prince William’s visit to Northern Ireland today.

The Duke and Duchess of Cambridge started their day at Ulster University’s Magee Campus, where they chatted to nursing students, paramedic science students and those accepted into the College of Medicine.

Kate turned heads on the day in a magenta power suit by her favourite designer Emilia Wickstead.

It was great to meet the first cohort of medical students accepted into @UlsterUni’s new School of Medicine. The new School will develop a new generation of doctors who will work in Northern Ireland and beyond once their studies are complete. pic.twitter.com/MOVLeP89iM

— The Duke and Duchess of Cambridge (@KensingtonRoyal) September 29, 2021

The suit is from the designer’s Autumn/Winter 2021 collection, and Kate paired the look with a navy polo neck, and matching Emmy London heels.

Kate and William also dropped into the university’s Student Union this afternoon, to attend their ‘Culture Shock’ event.

In a video from the event, the couple were seen chatting to students while enjoying a glass of Guinness.

— The Duke and Duchess of Cambridge (@KensingtonRoyal) September 29, 2021

The Duke and Duchess jetted to Northern Ireland this morning, after attending the world premiere of the new James Bond film ‘No Time To Die’ at London’s Royal Albert Hall on Tuesday night.

The couple were joined by William’s father Prince Charles and his wife Camilla at the event.

Kate stunned in a gold Jenny Packham gown for the occasion.

No Time To Die is the 25th Bond film and Daniel Craig’s last after 15 years in the role.

It showcases the inspirational work of actors, musicians, directors, cinematographers and all those involved in making the film so special. pic.twitter.com/vZJ4s0NMId

— The Duke and Duchess of Cambridge (@KensingtonRoyal) September 28, 2021